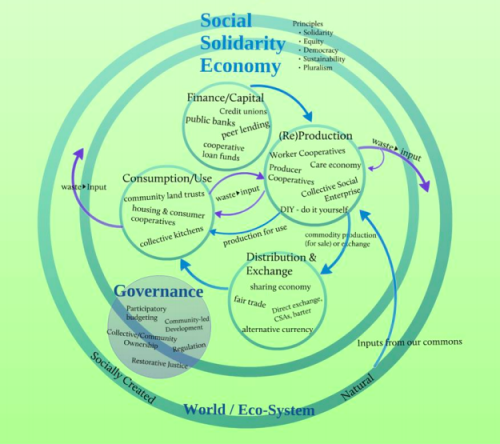 The Global Vision for a Social Solidarity Economy: Convergences and Differences in Concepts, Definitions and Frameworks paper released by RIPESS is part of a process of debate and consultation that has been carried out throughout the years. Reflecting on practices, concepts and frameworks shaping social solidarity economy (SSE) is an ongoing process since the first meeting on the globalization of solidarity in Lima in 1997. The vision of SSE has been steadfast, but underlying concepts, definitions and frameworks have, and continue to evolve.

The actors of SSE are invited to use this document as a tool for reference, reflection and education in their activities for building and promoting an alternative model of development based on SSE. The global vision paper lays out the main elements that arose from the discussions and identifies areas to explore further.

This paper is part of an ongoing process of discussion and debate about the concepts, definitions and framework of the social solidarity economy (SSE). RIPESS (Intercontinental Network for the Promotion of SSE) has engaged in this process from its first Global Forum on SSE in 1997 through to the present. The vision of SSE has been steadfast, but underlying concepts, definitions and frameworks have, and continue to evolve. In 2012, the RIPESS Board agreed to make the RIPESS Global Vision one of the main themes of the 5th Meeting of the SSE which was held in Manila in October 2013. We organized a global consultation process in which an earlier draft of this paper was widely circulated and each continent took on the responsibility of moving the dialogue through a mixture of live meetings, conference calls and electronic communication. There was also an electronic forum on the RIPESS website that was open for comments from anyone throughout the world. At the Manila Meeting there were around 100 people who participated in a lively and productive World Café exercise to further explore, discuss and share their views on the meaning of the SSE. This paper builds on the whole of this process, as well as the RIPESS Charter that was adopted in 2008 which lays out our values, mission and vision.