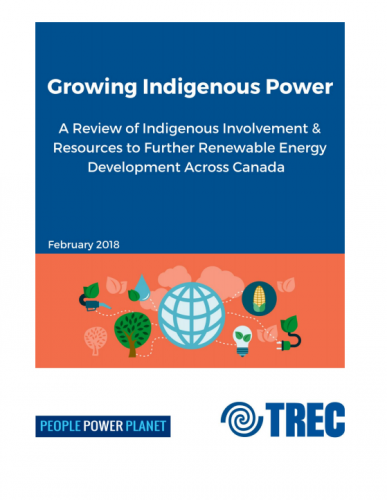 As Canada generates an expanding proportion of its energy from Renewable Energy (RE) sources such as wind, solar, biomass and geothermal, First Nations, Inuit and Métis communities residing across Canada are playing an increasing role in these projects. “Indigenous Power” projects, as we call them in this report, are RE projects that include some level of ownership by an Indigenous community, where the community either leads the project themselves or participates as a majority or minority stakeholder in partnership with a commercial developer.

Throughout Canada’s history, there are many examples of energy projects that have caused damage to traditional territories and infringed upon the rights of Indigenous communities, including RE projects such as large-scale hydroelectric projects (McLachlan, 2014; Calder et al, 2016; Wilt, 2016). Both developers and governments are beginning to understand they will have greater success in building RE projects, if they engage Indigenous communities to participate meaningfully as stakeholders and beneficiaries. Further, many Indigenous communities are increasingly playing a leadership role in building RE projects that can generate revenue in a way that is consistent with cultural and environmental values. RE technologies allow for smaller scale and distributed installations, which, compared to traditional bulk generation, make them more accessible for community participation, especially if favorable policies and support programs exist to help communities compete with large developers.

This report attempts to highlight the current state of Indigenous Power across Canada, by exploring the potential benefits such projects can bring to communities, featuring examples of Indigenous Power projects, and outlining the various supportive policies and programs that exist in each province. We also present challenges, common themes and lessons learned from project practitioners, and provide some suggestions about policy considerations and areas for future research and discussion.