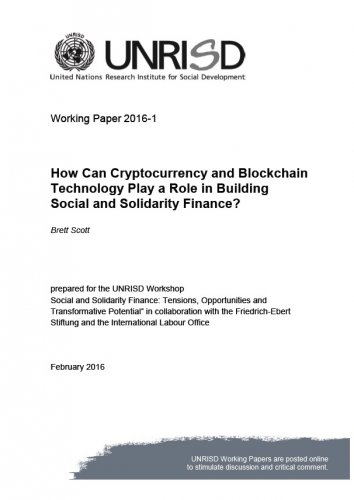 The rise of Bitcoin has been ambivalently received by many in international development circles. The cryptocurrency is based on collaborative open source principles and peer-to-peer networks that suggest a commitment to social solidarity and mutual aid, but Bitcoin’s image has become associated with speculators, profit-driven entrepreneurs, market-fundamentalist libertarians and technology fetishists (Yelowitz and Wilson 2015). The “scene” or community around Bitcoin seemingly has little connection to the gritty social reality of many in poorer countries. The frequently aggressive rhetoric within the community, as well as the inequality of access and wealth within the system, seems—at first glance—to clash with the ideals of those in social and collaborative economy movements.

Despite this, the question of whether Bitcoin can be harnessed to empower marginalized communities and build new means of solidarity-based finance remains unanswered. This paper sketches out the contours of some key issues that social and solidarity finance practitioners should consider when thinking about cryptocurrency technology. It is intended to provide a primer on the basics of Bitcoin, and to flag up existent narratives on the technology’s potentials and limits.

Download How Can Cryptocurrency and Blockchain Technology Play a Role in Building Social and Solidarity Finance?

First, this paper considers claims made by Bitcoin proponents concerning the positive role Bitcoin can play as a tool of financial inclusion, or as a tool to build new systems of property rights in countries with unstable governance. It also considers technical and political critiques of these claims.

Second, the paper looks at the attempts to design new cryptocurrencies—such as Faircoin—based on explicitly cooperative and social justice principles.

Third, the paper considers the emergent wave of “blockchain 2.0” innovation, in which the underlying “blockchain” technology of Bitcoin is expanded into realms like share issuance and micro-insurance. The original Bitcoin community made much out of the “trustless” nature of the technology (Miscione and Kavanagh 2015)—the fact that it does not rely on trusted central intermediaries—but newer groups are expanding the vision into one of trust-enabling decentralized cooperatives, or “distributed collaborative organizations”.