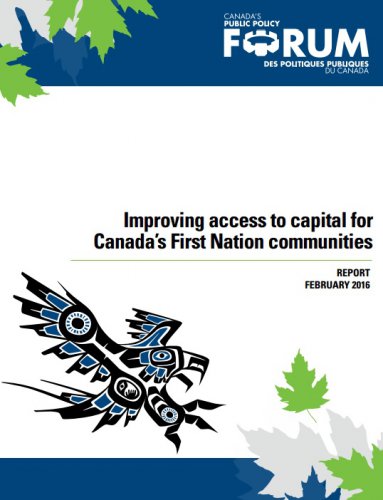 First Nation communities face barriers to accessing capital and financial tools that are critical to improving prospects for economic and social prosperity. Archaic legislation has limited First Nation governments’ ability to raise revenue through borrowing and private investment. These restrictions, which do not apply to other Canadian governments, make it difficult for First Nation representatives to borrow at lower interest rates that make infrastructure investments more affordable. The result has been disproportionately higher cycles of poverty and underdevelopment in Indigenous jurisdictions. Today, there is a growing consensus that restrictions should be lifted on First Nation governments to support the integration of First Nation communities into the larger economic life of the country.

The FNFMA provides a framework for First Nations to strengthen their financial management capacity and systems, implement a rigorous property taxation regime, and finance infrastructure and other projects in their communities through bonds. Under the regime, First Nations can take these steps with the support of First Nation institutions, the FMB, First Nations Tax Commission and FNFA.

Moreover, a growing number of jurisdictions are also opting out of certain provisions of the Indian Act to gain greater control over their finances. These developments represent an important breakthrough for First Nation communities that have struggled “after years of poor treatment from high-interest lenders…single year funding and short-term loans…”

But these steps will only be part of the solution. Closing the capital gap between mainstream Canada and First Nation communities – which is estimated at $43.3 billion – will require a more comprehensive strategy that addresses the underlying causes that impede access to capital. It will also necessitate more balanced revenue mix for First Nation communities to reduce dependence on federal transfers.

This report synthesizes the findings of the Public Policy Forum’s 2015 roundtable series on access to capital issue for First Nation people in Canada, and points to practical reforms that could form the basis of a First Nations investment action plan. While there was a divergence of opinion, many participants agreed that the following steps could help increase the flow of capital into First Nation jurisdictions:

Implementing the report’s six broad recommendations, and the action items discussed later in this report, can help set the conditions that will allow First Nation jurisdictions to take greater financial control of their future. Closing the capital gap will require addressing underlying issues related to funding, education and governance. And significant investments will need to be made. But the costs to individuals, communities and the broader economy will be much higher if nothing is done. It is time to act.

Terms
Executive Summary
Introduction
Barriers That Limit First Nations’ Access To Capital
Recognizing And Building On Success
Recommendations For Closing The Capital Gap
Conclusion: We Should Do More
Appendix: List Of Participants