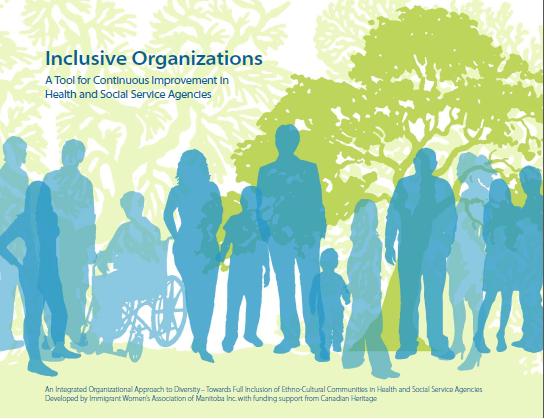 This tool presents some ideas to assist health and social service agencies and organizations to meet their inclusion and equity goals with respect to Manitoba’s increasingly diverse ethno-cultural and ethno-racial population.

In the development of the tool, the complexity of what is involved in organizational adaptation to an increasingly diverse ethno-cultural and ethno-racial population was brought to the forefront.

The tool suggests principles and promising practices that are consistent with the values of social equity, social justice and democracy. Promising practices are not a program, but a range of practices, processes and actions that while not proven, are demonstrating promising results.

The tool is based primarily on the findings of a 2002 literature review that was carried out by the Immigrant Women’s Association of Manitoba (IWAM) in partnership with the IWAM Network. The IWAM Network is a group of health and social service agencies, including government agencies.

Building on the partnership model of the literature review, an inclusive participatory approach was used in the development of the tool. Following a June 11, 2005 Workshop attended by 65 people from health and social service agencies, federal, provincial and municipal government departments and ethnocultural communities, several people came together in eight small sessions to draft the tool. New ideas that emerged from the discussions were incorporated into this work.

The literature review and this follow-up work originated from a barrier analysis conducted by IWAM which showed that immigrant women face multiple barriers in accessing health and social services. Based on the findings of the literature review that service barriers will be eliminated only when organizations are fully inclusive, the tool focuses on organizational development and change to integrate diversity at all levels of an organization.