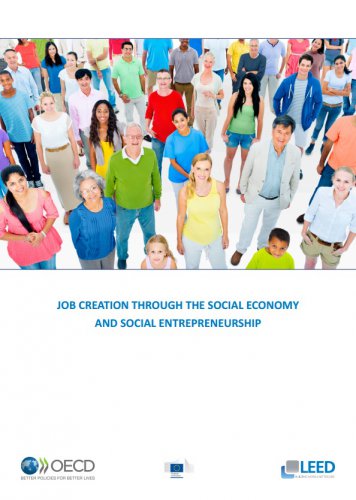 The social economy has received increasing policy attention in recent decades, particularly with regard to its contribution to employment. Much has been written about the potential role of the social economy as a solution to unemployment. It has been estimated that social economy organisations (SEOs) broadly defined as co-operatives, mutuals, associations and foundations, together account for 6.5% of aggregate employment in the European Union (Monzon and Chavez, 2012). However recent policy attention has more narrowly focused on the role of SEOs in work integration for vulnerable groups (such as the long term unemployed, or those with physical or mental health issues). At the same time, little is known about working conditions within SEOs, particularly for these vulnerable individuals.

This report examines the role of SEOs in the provision of employment, and how they have fared during the recent period of economic turbulence. Attention was also paid to SEOs working with vulnerable individuals, either as direct providers of jobs, or providers of training and services designed to help vulnerable individuals into the mainstream labour market. In particular, the research sought to gain greater understanding of working conditions within these SEOs, and the challenges they faced in providing high quality employment while having to keep costs low in order to operate in competitive markets.

Download Job Creation through the Social Economy and Social Entrepreneurship

The report has in two distinct parts. The first part, whose structure is outlined below, situates the focus of the research within the wider literatures and explores the data from a survey undertaken in eight countries. The second part of the report provides a short overview of the social economy within the surveyed territories and the survey results from those territories.