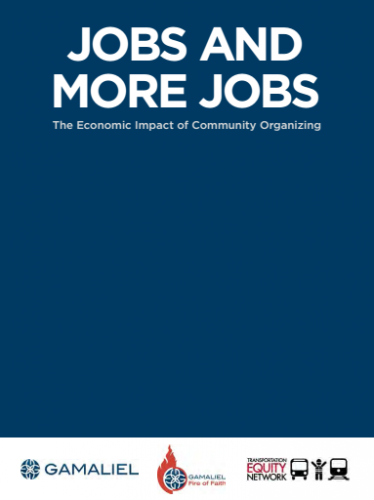 Community organizing brings victories to working people who provide for their families and builds movements that unite people around a shared vision of social justice. To these achievements this report adds a third contribution: adding up the advocacy victories of organized people highlights that community organizers are, in an important sense, creators of jobs that move hundreds of thousands to employment and create opportunities for many more.

We realized several years ago that affiliates’ advocacy victories were also creating or saving jobs. When Gamaliel of the Heartland – the Missouri-based groups of Metropolitan Organization for Racial and Economic Equity (MORE2) and Metropolitan Congregations United (MCU) came together to stop a plan that could have replaced school district offices with an un-tested new structure, they preserved a stable education system for thousands of mostly African-American and Latino families – and they also saved hundreds of jobs in the community for teachers, support staff and administrators. Likewise when Pennsylvania Interfaith Impact Network (PIIN) advocated for a significant legislative investment in public transportation in the state’s 2014 budget, transit riders won – but so did job seekers. These and several other stories are highlighted in this report, along with the data that show this method of counting the jobs generated by these advocacy victories provides another angle on the role of advocacy in our communities and regions.

In addition to highlighting the job creation aspect of these victories, this method of tracking our work also quantifies and aggregates Gamaliel affiliates’ impact, providing a useful yardstick to measure one aspect of our efforts year in and year out. Finally, using generally accepted formulas that track economic impact, looking at community organizing as a job creator provides a sense of the value of these community-organizing efforts as a share of the nation’s Gross Domestic Product, or economic output for the year.

Looking at the achievements of the Gamaliel network among its 43 affiliates across 16 states, in 2012 and 2013, Gamaliel and its affiliates won victories worth more than $13 billion, creating more than 450,000 jobs and generating more than a $17 billion increase in the GDP. As this report suggests, the lesson learned is a powerful one: by working together for the common good we can create jobs and prosperity for our communities—a powerful argument in support of community organizing.