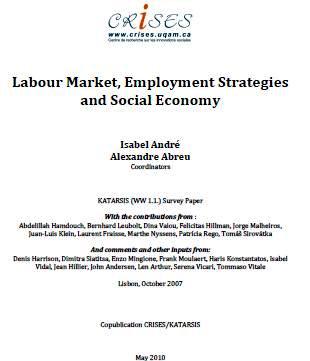 This report focuses on socially creative strategies (SCS), mainly in reaction to exclusion dynamics (ED) in the “labour market, employment strategies and social economy” existential field. This existential field is essentially regarded as comprising all exclusionary and inclusionary aspects having to do with labour (whether paid, voluntary or corresponding to self-employment), work more generally (i.e. including “commodified” labour and “non-commodified” work in a variety of social spheres) and the social economy (regarded as that subset of the third sector that is governed by the principle of reciprocity). Special emphasis is given to the linkages between SCS and ED, namely the conditions under which the latter give rise to the former, the way in which the former can and should be regarded as representing the contextually-bound outcome of an interplay between practiceoriented goals (seeking to overcome concrete problems and threats) and ideology-oriented aims (seeking to enact alternative societal projects) and the ways in which SCS come to be appropriated, and possibly “neutralised”, by agents and in ways that are largely alien and contradictory to their original purpose and content.

CED Around the World
Social Economy