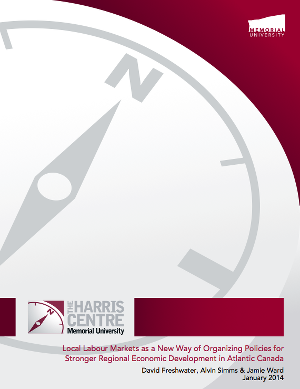 For several years, researchers affiliated with the Leslie Harris Centre of Regional Policy and Development (The Harris Centre) at Memorial University, have been developing a new way for communities in Atlantic Canada to think about organizing their economic development efforts. The approach uses worker commuting data to identify local labour markets as the best unit for designing and implementing economic development strategies. Local labour markets developed from commuting data have seldom been used for smaller places where multiple communities make up the local labour market. Our research suggests that this should change.

Smaller places often recognize that job openings in their towns are sometimes filled by people from nearby communities: as such, there are important spillover effects from any one community’s development efforts on nearby places. Since these natural spillover effects exist, it makes sense to deal with them directly and to collaborate on plans for development efforts across the local labour market. This idea also applies to how support from provincial and federal programs could be provided. Government support for communities can be more effective when understood in the context of regional spillovers.

This publication describes how our research was carried out and proposes some ways that functional regions can be used to help communities approach development with a recognition of linkages with other places. We have identified 259 distinct local labour markets in Atlantic Canada. The largest has over 400,000 people, while the smallest has only several hundred. Clearly, the opportunities and challenges differ for regions with degree of variability; however, we have identified five different size classes of region. Within each of those similarly sized classes, there are many useful similarities.

Suites of strategies and policies can be developed for each size class, and while individual regions will have to tweak these general strategies to fit their particular circumstances, the general recommendations provide a good starting point. Local leaders in a region can also use the research to identify other regions across Atlantic Canada experiencing similar situations. Regions in the same size class can provide useful ideas and experiences as a guide for forming a local strategy. Ideally, similar regions in different provinces could decide to collaborate in a peer learning arrangement.

The main conclusions from the research are that there are opportunities for economic growth in regions of all size, not just large regions. But many regions are not growing and the crucial public policy question is “how should governments organize to support growth?” Our analysis shows that local labour markets make a good unit for policy intervention, and that labour markets of different size need different types of support. Fortunately, it appears that there are five broad categories of labour market in the provinces of Atlantic Canada, which makes it easier for governments to think about policy strategies. We also believe that it could be important for regions in each category to look to other members in their category for ideas and support. In many cases regions in one province can have more in common with regions in another province than they do with adjacent regions. Crucially the research demonstrates that economic success is largely the result of the people in a region identifying potential strengths and acting to make their region economically stronger. While the national and provincial governments can play an important role in supporting local action stronger local economies are largely the result of stronger local communities.

While the publication provides an overview of the work that was carried out, greater detail is available by visiting www.mun.ca/harriscentre/regionalanalysis. There, you’ll find a longer final report with further detail on the ideas introduced here. We’ve also posted several technical reports that describe how the regions were identified, and the categories of regions developed.

About this Document
Introduction
The Process of Defining Regions

A Typology of Regions
Functional Region Maps of Atlantic Canada

Looking Across the Categories