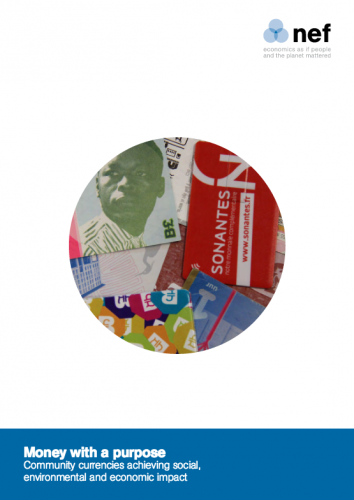 Since the financial crisis, interest in new types of money has surged. Projects like Bitcoin have hit the headlines as communities around the world experiment with their own currencies and methods of exchange. In this new and innovative field, we have only just begun to understand and measure their impact.

It is no coincidence that community currencies have rapidly risen to prominence in the years following the financial crisis. When the conventional monetary system foundered, alternative means of exchanging time and goods were created to plug the gaps.

These new currencies provide an important supplement to conventional money. A growing body of global evidence supports the idea that they can meet the needs of local areas and economies in ways that euros and pound sterling cannot.

Community Currencies in Action (CCIA) is a groundbreaking transnational project, looking at examples of community currencies in several states across Europe. Since 2011, it has pooled knowledge and expertise to strengthen its network of new currency initiatives.

This report uses the results from these CCIA pilot schemes, as well as other successful international examples, to assess the effectiveness of community currencies against the social, economic and environmental outcomes they were set up to achieve.

Community currencies vary widely in the way they are set up and run. They may be designed as printed vouchers or as digital credit. They can be focused on a specific group of users, such as patients in a GP’s surgery, or instead be open to stimulating economic activity across an entire town or region.

These individual design features and objectives are important, but this report moves beyond describing how a currency is set up to focus on what the projects are achieving. We assessed the six CCIA pilot projects under four outcome themes: Democratising services and organisations; Supporting the small and medium-sized enterprise (SME) economy; Countering inequality and social exclusion; and Addressing environmental impacts.

Money with a purpose found that:

Further evaluation for many of the projects referenced in this report is needed. Only then can their huge potential be translated into robust, accessible guidance and knowledge to advance the wider community currency movement.

There are six pilot projects in the CCIA project which form the focus of this evaluation report: