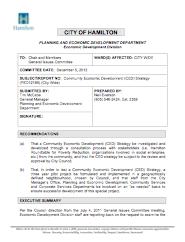 After research and consultation with experts in the community and other senior staff in the City of Hamilton, it was concluded that a “pilot project” for a Community Based Economic Development Strategy could be implemented for a three year term. If this pilot proves successful and achieves results satisfactory to Council, then the program could be continued and/or expanded and included as a component of the next version of the City of Hamilton’s Five Year Economic Development Strategy that will commence formulation in 2015.

In other large Canadian cities, CED activity exists and it is often led by community organizations with a range of approaches including micro-loans, “buy local” campaigns, support for social enterprise and access to mentors for entrepreneurs. A trend seems to be emerging to include the principles of CED as part of municipal economic development strategies. For example, Edmonton City Council has indicated that CED is a priority initiative and, as such, they are hiring staff to support this direction.