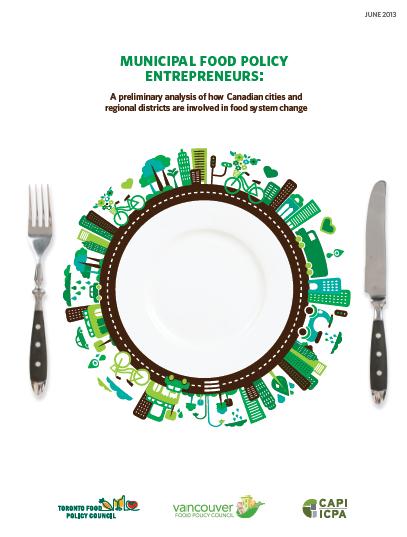 The report “Municipal Food Policy Entrepreneurs: A preliminary analysis of how Canadian cities and regional districts are involved in food systems change,” is the first scan of municipal and regional food policy development in Canada. It reveals that a growing number of communities right across the country have launched food charters, food strategies and action plans, and created food policy councils.

“We were surprised by the number of municipal governments involved in food policy work,” states Lauren Baker, food policy coordinator with the Toronto Food Policy Council at Toronto Public Health. “Municipalities are finding creative ways to improve people’s lives through the way they manage a broad array of food priorities.”

While municipal and regional governments have limited jurisdictional authority over the food system, many are springing into action on the food front. They are bringing together diverse sectors to stimulate the local food economy and generate more jobs, but also to address significant food issues such as agricultural land loss, climate change, food poverty, food affordability, and public health problems associated with inadequate or poor quality diets.

“The activity of food policy councils is clearly visible in almost every major city in Canada”, states Vancouver Food Policy Council member Joanne Bays. “Gardens and urban farms are sprouting in backyards, boulevards, rooftops and parking lots. Farmers markets, food vending carts, and food hubs are bustling businesses. And increasingly foods from nearby farms and oceans are found on the retail shelf and on our plates in restaurants, schools and hospitals.”

The research shows that Canada’s municipal food initiatives have varied governance structures. Some are formally linked to municipal departments; others have less formal structures and funding mechanisms, and some are largely volunteer-driven. The rate of growth of this food policy work has increased exponentially since 2005 and the most significant nodes of food policy activity exist in the provinces of British Columbia, and Ontario.

Given the increasing number and diversity of food policy initiatives, and the potential economic, environmental, social and cultural impact of these initiatives, the report recommends that the time is ripe to take a more systematic approach to documenting and evaluating their role and success. Further, it recommends the establishment of a national network to share best practices across municipalities, and to further efforts to clarify how governments at various jurisdictional levels can best support these efforts.

”With some 80% of Canadians living in urban communities, we need to understand how cities are creating change through food initiatives,” notes David McInnes at the Canadian Agri-Food Policy Institute. “Clearly municipalities are embracing food as a catalyst – to spur economic activity across supply chains, to improve the health of its residents and to respond to sustainability objectives, among other priorities.”

The report was prepared by researchers at York University’s Faculty of Environmental Studies, Rod MacRae and Kendal Donahue, and involved a diverse array of food policy organizations and advisors from across the country.