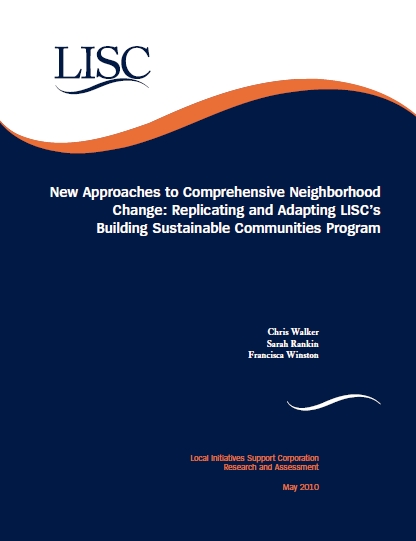 LISC’s Building Sustainable Communities approach to comprehensive community development is now underway in 63 distressed neighborhoods nationwide. Based on groundbreaking work in the South Bronx and, subsequently, in Chicago, Building Sustainable Communities creates a systemic framework for developing cohesive plans, leveraging new funds and implementing projects and programs that help raise standards of living among low-income residents and fuel sustainable, positive change in their communities. The framework is being replicated in LISC program sites across the country.

This report concludes that most local LISC offices have in fact introduced the core elements of the Chicago approach, an extremely encouraging result given the wide differences in economic, social, and political conditions across the 10 demonstration sites and their 38 target neighborhoods, as well as the considerable variation in local funding strength. In most targeted neighborhoods, the initiative can take advantage of already-strong relationships among community-based organizations, LISC local offices, and their systemic supporters, substantially boosting prospects for neighborhood improvement. Following each of the major elements of the NCP approach, the report further concludes that:

The Sustainable Communities approach holds that these elements of community partnership, comprehensive programming, and intermediated support are interdependent: each works better if the other elements are present. This critical hypothesis will be tested as the analysis proceeds.

CED Around the World
Urban CED