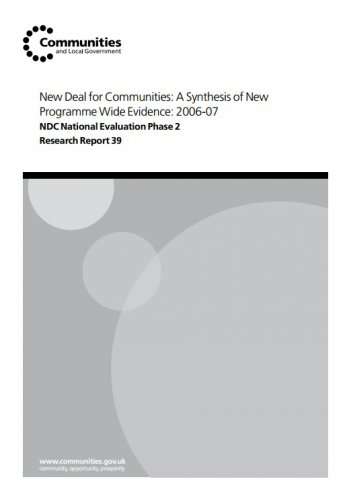 The New Deal for Communities (NDC) Programme is one of the most important neighbourhood renewal initiatives in England. The NDC Programme was launched in 1998 with the aim of reducing the gap between deprived neighbourhoods and the rest of the country through community-led partnerships in 39 neighbourhoods.

The 39 NDC Partnerships each face unique combinations and types of disadvantage, but all tackle problems across six themes: poor job prospects, high crime, educational underachievement, poor health, poor quality housing and physical environment. Between 1999/2000 and 2005/06 some £1.54 billion (2005/06 prices) has been spent by the 39 Partnerships, about a billion from Government investment and the rest from other sources, especially other public funds (£390m).

Communities and Local Government commissioned the Centre for Regional, Economic and Social Research (CRESR), at Sheffield Hallam University, together with its partners, to undertake the evaluation to explore the degree to which the Programme has been successful and to use this evidence to identify effective ways to plan long term renewal programmes. This report provides a synthesis of new evidence which emerged during 2006/07. Findings for the period from 2001 to 2005 are available in the 2005 Interim Evaluation report.

This report explores change over time across NDC areas:

Analysis of the 2002 to 2006 NDC and comparator area household panels arising from the household surveys will be available in 2008 and are not covered in this report.

EXECUTIVE SUMMARY
CHAPTER 1: An Introduction to the Programme and the Evaluation
CHAPTER 2: How have NDC areas changed?
CHAPTER 3: How have NDC neighbourhoods changed relative to other areas: benchmarking change?
CHAPTER 4: What is the most effective way to plan longer term renewal?
CHAPTER 5: Next Steps
APPENDIX