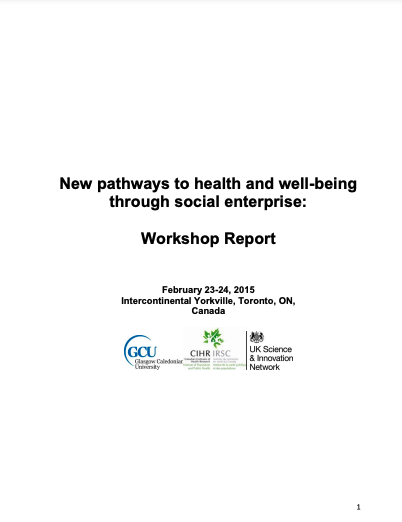 The ‘New pathways to health and well-being through social enterprise’ workshop held in February 2015 was co-hosted by the Canadian Institutes of Health Research – Institute of Population and Public Health (CIHR-IPPH) and Glasgow Caledonian University (GCU) with support from the UK Science and Innovation Network. This workshop represented the first opportunity for the partners to connect with diverse stakeholders with interests in social enterprise (SE), population health, and/or health equity. The meeting was attended by practitioners from social enterprises, researchers specializing in the study of social enterprises and population health researchers with an interest in social enterprise and their health and/or health equity impacts, and members from the CIHR-IPPH, UK Science and Innovation Network, and GCU teams.

What is social enterprise?

There is some contention around the definition of social enterprise. Common features across several definitions include:

This workshop included presentations, panel discussions, and small group work which focused on topics including: how population health interventions and SE intersect, the synergies and tensions between public health and SE, profiling SE in Canada and abroad, examples of research on SE, and the role of context in relation to SE.

The following themes emerged from the panel discussions and presentations:

The potential for social enterprises to impact health

There was considerable discussion throughout this workshop about how social enterprises can affect individual and community health. Workshop participants noted that social enterprises have the potential to address social determinants of health, including alienation. Targeting alienation may bridge upstream and downstream risk factors.

Employment can also lead to improved interpersonal relationships in a community. Further, the positive impact of being employed may have a spillover effect where employees may reconsider self-care. Even a small increase in income can make a large difference, for example financial benefits have an impact on diet and dental care.

Any SE could be a considered a public health initiative, as it is their mission to combat aspects of social vulnerability; however, it is important to note that most social enterprises are not created with the goal of improving health. Participants also reinforced the importance of considering the cost of neglect.

Participants spent considerable time discussing how to best research and evaluate social enterprises. Participants emphasized the importance of SE research and evaluation strategies being participatory in nature. Including community and social enterprise employees in the development of the SE measurement indicators is especially important, as it allows them to have ownership over the information, and offers them an opportunity to include elements they think are important to study. It was suggested that resources could be provided to SEs for the staff to evaluate their own practices.

There was considerable discussion around how to develop a common set of indicators to evaluate SE research. Participants suggested the sustainable livelihoods approach, used in International Development, but that can also be applied to community contexts. This method, developed initially by the UK’s Department for International Development is ‘strengths-based’ and includes elements of social determinants of health. It measures resilience; for example, a person’s ability to get through challenging times emotionally, physically, and mentally.

There is a need for robust methodologies to push SE research forward. Participants noted the need to capture a full spectrum of benefits, including health, economic and social, to present a more comprehensive picture to governments and other stakeholders. However, we need to be careful not to get caught up with the idea that we need to measure everything.

Others noted the importance of capturing the social return on investment from SEs. For example, it would be beneficial to produce an easy number to demonstrate how much has been invested and how much has been saved because of the investment. We might want to look to indicators developed outside of Canada.

Regarding how funding councils can capture indicators, one suggested approach is to include a list of contextual elements to examine but leave it open ended to allow researchers to add what is relevant. Then there is possible for comparability while allowing for unique circumstances. This also allows researchers to account of emerging contexts.

A strategy is needed to align and unite the different sectoral silos; this could be an area for future research.

The importance of understanding contextual influences of SE was discussed. The participants reflected upon what features of context matter, and when?

Participants voiced the need to understand why SE work in particular contexts and not others; this question requires mixed research methods and is an important area for future research.

Participants emphasized the importance of embedding context into one’s theory of change. We try to build logic from intervention to outcomes, but focus on interventions. It may be difficult to prescribe which elements of context should always be included in research proposals because of the variability of context.

Progress since the workshop

There has been considerable progress since this workshop. Specifically, collaborations have been formed, applications and expressions of interest to different funders have been submitted to study various elements of social enterprise, and the Social Enterprise Sector Survey, a survey which collects information on social enterprises by province, has included a health question into their current 2015 survey of SE in Ontario. Also, the CIHR-IPPH plans to include mention of social enterprises as a type of population health intervention in its upcoming funding call on Population Health Intervention Research.