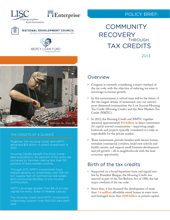 As Congress debates tax reform, it is important to remember that two of the largest drivers of investments supporting low-income families and distressed communities are the Low Income Housing Tax Credit and the New Markets Tax Credit. These two tax credits generate more than $14 billion of investments annually in affordable housing, small businesses, and manufacturing and community facilities including charter schools, healthcare clinics and child care. They are all in neighborhoods with the least economic opportunity. If these credits were to disappear, the consequences would be felt immediately and could be irreversible. It is unlikely that there would be any kind of substitute for these investments.