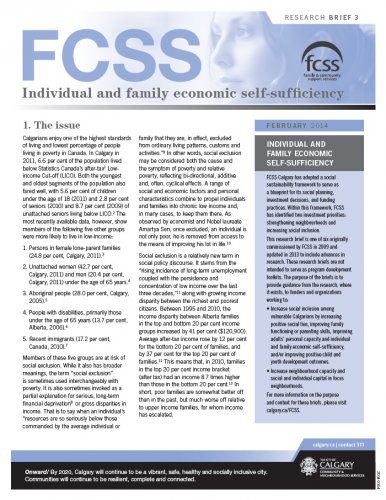 Calgarians enjoy one of the highest standards of living and lowest percentage of people living in poverty in Canada. In Calgary in 2011, 6.6 per cent of the population lived below Statistics Canada’s after-tax Low income Cut-off (LICO). Both the youngest and oldest segments of the population also fared well, with 5.6 per cent of children under the age of 18 (2011) and 2.8 per cent of seniors (2010) and 8.7 per cent (2009) of unattached seniors living below LICO. The most recently available data, however, show members of the following five other groups were more likely to live in low-income:

Members of these five groups are at risk of social exclusion. While it also has broader meanings, the term “social exclusion” is sometimes used interchangeably with poverty. It is also sometimes invoked as a partial explanation for serious, long-term financial deprivation or gross disparities in income. That is to say when an individual’s “resources are so seriously below those commanded by the average individual or family that they are, in effect, excluded from ordinary living patterns, customs and activities.” In other words, social exclusion may be considered both the cause and the symptom of poverty and relative poverty, reflecting bi-directional, additive and, often, cyclical effects. A range of social and economic factors and personal characteristics combine to propel individuals and families into chronic low income and, in many cases, to keep them there. As observed by economist and Nobel  aureate Amartya Sen, once excluded, an individual is not only poor, he is removed from access to the means of improving his lot in life.