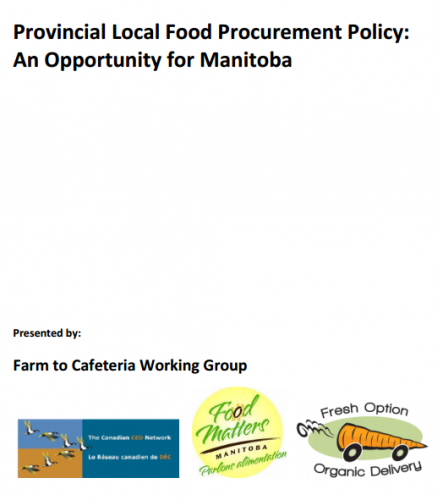 According to the Procurement Services Branch, the Manitoba Government annually spends over $8 million on food products for publicly-funded schools, hospitals, correctional facilities. Manitoba does not, however, deliberately use its expansive buying power to stimulate the local economy, thereby forfeiting a significant opportunity to support Manitoban farmers or producers and bring fresh, healthy food into its many institutions.

Despite the abundance of arable land and agricultural output in Manitoba, our food system has shifted significantly from locally sourced to globally imported. In the last 20 years, there has been a 28.4% decrease in the number of Manitoba farms – and more than 2000 Manitoba farms disappeared between 2001 and 2006. The resulting consolidation of the Manitoba farming industry has created a de-emphasis of local markets, and increased the percentage of food exportation. This steady decline of small-medium Manitoba farms is mainly attributable to high operating costs and the depreciation of commodity values. However, external forces such as foreign market demands and regulations have also weakened the stability of local farming operations.

The disappearance of family farms and increasing distances between producers and consumers has prompted many to question the environmental, economic, and social sustainability of our food choices. As Manitoba’s agricultural sector becomes increasingly export-based, and as we grow more reliant on an imported food supply, the issue of food security – ensuring that all Manitobans can access and afford nutritious food and that agricultural producers are able to make an adequate livelihood – is becoming increasingly salient.

In response to this concern, many jurisdictions around the world have developed and committed to institutional policies and guidelines to purchase local and sustainable food. The procurement initiatives described in this brief are all seen as tools that governments can use to promote a healthier and more sustainable local food economy.