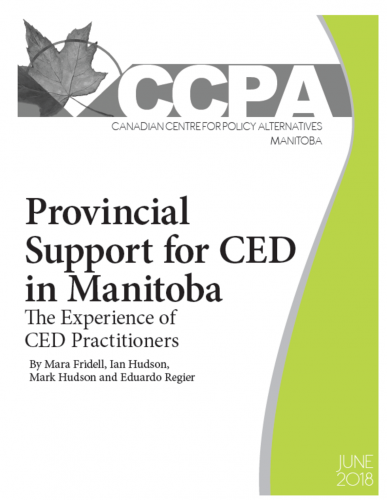 This is a study of the previous provincial government’s policy approach to Community Economic Development (CED). Manitoba at the time was described as a leader in CED. In contrast to the prevailing neoliberalizing winds, “social demo­cratic governments (in Quebec and Manitoba) have been important promoters of CED/Social Economy” (Loxley, Silver and Sexmith, 2007;  see also Sheldrick & Warkentin 2007).

Although the previous Provincial NDP government was, in many ways, supportive of CED, the opinion of CED practitioners on their relationship with the pro­vincial government, and the specific policy tools that impact CED, had not yet been investigated. This report is an attempt to investigate how CED practitioners experienced their relationship with the Provincial government. In consultation with the Canadian Community Economic Development Network (CCEDNET) this report chose three specific areas: the use of provincial procurement to foster CED; provincial policy towards the non-housing cooperative sector; and provincial policy in relation to housing cooperatives. Our analysis uses data gathered from focus groups made up of CED practitioners.

The report reviews the existing literature on the importance of policy for CED; the policy environment for CED cre­ated by the NDP in Manitoba especially the spe­cific policies that are being investigated in this study; highlights some of the policies that have been implemented in other provinces; and analyzes the responses of the focus group participants in procurement, non-hous­ing cooperative and housing cooperative focus groups. The report makes recommendations and conclusions as well.