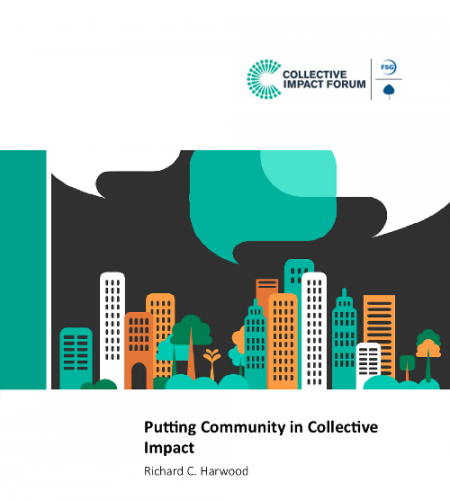 This article will lay out five key characteristics of civic culture, explore why they matter, and how paying attention to them may be the difference between a collective impact effort getting stuck – even falling flat – or generating the kinds of results we seek. A collective impact approach holds enormous promise for bringing about meaningful change – but only if such action is taken with communities, not apart from them.

Not long ago, I led a discussion in Battle Creek, MI, with over a hundred leaders – from across all sectors – who were there to kick‐off a collective impact effort focused on vulnerable children and families. In that discussion, the leaders repeatedly described the community as “jaded” and “frustrated.” They said that too little trust exists in the community for people to make progress that “sticks,” that endless turf battles inevitably cripple efforts, and that there aren’t enough credible leaders and organizations to help the community move forward. The community, they said, is tired of initiatives and programs that start one day only soon to fade away and further undermine people’s confidence that anything significant can be accomplished. They asserted that the prevailing way of doing business is to do things to people rather than with people.

While this particular conversation happened in Battle Creek, it could have easily been in any one of hundreds of conversations I’ve had with people in scores of communities across the country. There is a deep hunger within people in communities to make a real dent on the challenges that beset us. But people are wrestling with fundamental questions about how to create these changes, questions that go to the heart of community life – how it functions, how to engage it, how progress can be made. Time and again I hear concerns about what will it take to combat local conditions like those identified in Battle Creek. How can their community actually come together, when so many forces seem to continue to split us apart? And even if progress is made, what will it take to sustain it? It is one thing to want change; it is quite another to produce it.

Just about everywhere I go nowadays – including Battle Creek, where my own Institute’s partnership with the community continues – people are talking about the role that collective impact could have in moving communities forward. That’s a good thing! I’ve spent the past 25 years arguing that there is a vacuum in communities for groups that span boundaries and bring different sectors to the table (including “everyday people”) to address common challenges together. Now an ever-growing number of community leaders, funders and businesspeople, among others, see the “collective impact” route as a compelling way to tackle seemingly intractable challenges that have eluded them. While past community efforts may have produced isolated success in some communities, now people see a possibility for widespread, systemic change.

And there’s good reason for this optimism. In California, for example, over 55 organizations came together in the Community Partnership for Families of San Joaquin to transform social service delivery in the county. Through the establishment of 18 integrated Family Resource Centers, 25,000 families have been able to get the help they need through a streamlined intake and planning process. Results for these families include a 10 percent increase in school attendance and lowered rates of child abuse and neglect.

The Community Partnership was one of several high-impact collaborations identified by the White House Council for Community Solutions in 2012. These case studies prove the potential of long-term investment in communities, and of community members as “partners and producers of impact.” Another notable example is the Parramore Kidz Zone, a collaborative led by the City of Orlando, FL. The Zone provides a broad range of programs to children, at sites throughout the neighborhood, from free tutoring to comprehensive health and wellness programs. From 2007 to 2010, grade-level reading scores here increased by 15 percent; and math scores by 21 percent. The juvenile arrest rate fell by 81 percent; and, as in San Joaquin, the city will apply their collective impact approach to other neighborhoods.