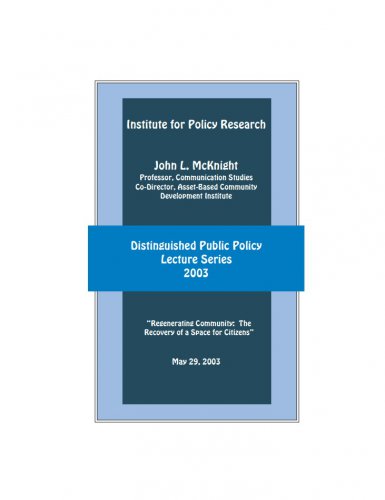 The Center for Urban Affairs, now renamed the Institute for Policy Research, was founded in 1968.  This paper recounts the beginnings of the Institute’s Community Studies Program, highlighting its unusual, perhaps unique, character.

When the Institute began in the throes of the 60s revolution, the spirit of reform was everywhere, and it was especially intense among the young people at universities. The Institute’s newly assembled faculty was also imbued with this spirit of reform, deeply committed to research that would change American cities that were then sites of revolt, burning, and uprising.

The initial focus was upon what was called “institutional change.” By that they meant better schools, better medical systems, better social service systems, better government, better criminal justice systems, etc. They also assumed that the key to reforming these systems was adequate funding and the introduction of modern technology, personnel training, and management methods. If these kinds of reforms were accomplished, they believed that cities would become liveable and residents would thrive. Therefore, research began with a focus on how modern methods could change the well-being of city people—especially those with lower incomes.

Shortly after they began their work, they initiated a monthly seminar in which all of the Institute’s faculty took part in a discussion with an outside expert. The first of their seminar visitors was a well-known physician who was the medical director of the recently formed national Head Start Program. His name was Dr. Robert Mendelsohn. He joined their seminar and quickly learned of their commitment to health through institutional reform of medical systems and hospitals. He reacted with amazement at their institutional focus and said it was unscientific. The great preponderance of the scientific evidence, he explained, indicated that the critical determinants of health were not medical systems or access to them. Therefore, he said, their primary focus on medical system reform was a misguided effort if they were concerned about the health of neighborhood residents. Indeed, he said, we were caught in the “institutional assumption”—the idea that health was produced by hospitals, doctors, and medical systems.