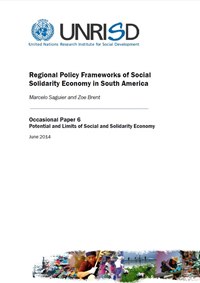 This paper looks at how the social and solidarity economy (SSE) discourse has been deployed at a regional level by the Union of South American Nations (UNASUR) and Southern American Common Market (MERCOSUR), and the implications of these new policy frameworks for the advancement of SSE practices. Though civil society groups have presented SSE as a new economic paradigm, regional policy frameworks have implemented it as an add-on—or complement—to dominant capitalist economies. This has happened in two key ways: (i) the SSE sector, and cooperatives in particular, are cast as drivers of regional integration and socioeconomic policy, although a limited involvement in major integration projects represents missed opportunities for SSE to be mainstreamed; and (ii) despite SSE policy being portrayed as a sort of intervention that combines social and economic policies, its implementation almost exclusively by ministers of social development means that it is institutionally limited to the realm of poverty eradication rather than a restructuring of the dominant economy. SSE is also fiscally dependent on dominant industries, which—in the end—does not reverse or challenge the ongoing process of economic centralization in key sectors.

Marcelo Saguier is Senior Researcher at the Department of International Relations, Latin American Faculty of Social Sciences (FLACSO Argentina) and Research Fellow at the National Scientific and Technical Research Council (CONICET), Argentina.
Zoe Brent is a doctoral candidate at the International Institute of Social Studies, The Hague, Netherlands, and Research Fellow at Food First/Institute for Food and Development Policy, Oakland, California, United States.