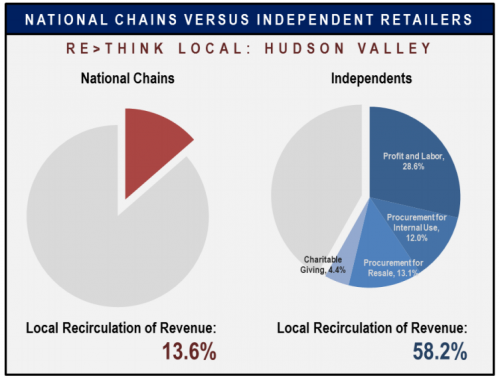 Civic Economics is pleased to present the American Booksellers Association, Re>Think Local, and ABA members Half Moon Books and Oblong Books and Music with this local edition of the Indie Impact Study Series detailing the impact of the independent business community in the Hudson Valley of New York State.

Re>Think Local collected surveys from independent, locally-owned businesses engaged in the retail and restaurant trade in Dutchess,  Orange, and Ulster Counties in the Hudson Valley. Each business was asked to complete a survey about its business practices that  focused on the distribution of revenue that recirculates in the regional economy through the categories of expenditure described above.

For comparison purposes, Civic Economics analyzed annual reports for four major national chain stores (Barnes & Noble, Home Depot,  Office Max, and Target). These stores recirculate an average of 13.6% of all revenue within the local markets that host its stores. For  chain restaurants, we analyzed Darden (Red Lobster, Olive Garden, etc.), McDonald’s, and PF Chang’s. These eateries recirculate an average of 30.4% within the local market.

The charts on the following pages summarize these findings, providing further detail on local recirculation by local businesses.