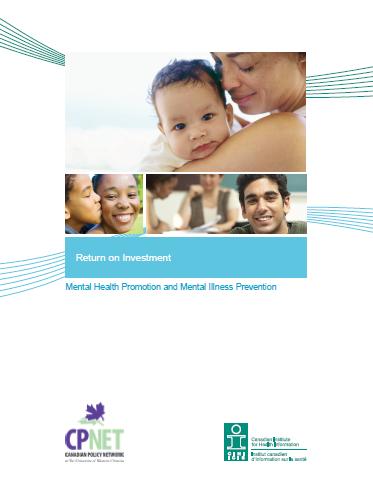 In 2007–2008, Canada spent an estimated $14.3 billion in public expenditures for mental health services and supports.1 According to a 2009 report by the Mood Disorders Society of Canada, costs for disability due to depression are fastestgrowing disability costs for Canadian employers.2 The Centre for Mental Health in the Workplace claims that the economic cost of mental illnesses is equivalent to 20% of corporate profits.3 Furthermore, evidence suggests that, by 2030, mental illness will be the leading cause of disability in high-income countries;4 however, according to a 2010 Institute of Health Economics report, Canadian governments spend less than most developed countries on mental health.

Recognizing the critical importance of mental health, the Canadian Population Health Initiative (CPHI), a division of the Canadian Institute for Health Information (CIHI), published Exploring Positive Mental Health in 2009. By doing so, CPHI took an important step in defining, measuring and promoting mental health. As a follow-up, the present study, funded by CPHI, reviews the body of evidence associated with the return on investment (ROI)i of mental health promotion and mental illness prevention.ii The specific research question being addressed is as follows:

“What are the extent, range and nature of research activity in the area of economic analysis of mental health promotion and mental illness prevention?” Both peer-reviewed (2001 to 2011) and grey literature sources were explored. For peer-reviewed articles, the primary search engines were Medline, PsycInfo, Econlit, Web of Science, ProQuest Research Library, Google, Google Scholar, NHS EED, Cochrane Library, Campbell Collaboration and ERIC. Grey literature sources focused on reports and studies from Canadian, American, Australian and United Kingdom organizations. A snowball survey and electronic survey provided a basis for the initial direction and approach to the grey literature. It should be noted that this was not a systematic review.