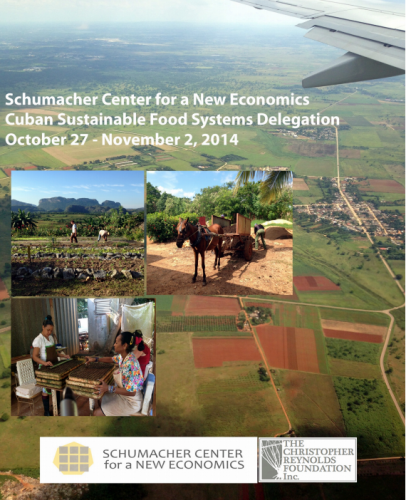 This delegation of professionals sought to share experiences in the development of sustainable food systems in both Cuba and the U.S. Shared experience and knowledge include:

The trip included conversations with government agencies, economists, small business entrepreneurs, members of community gardens, farmers at farmers’ markets and owners of the evolving farm to table restaurants. In addition to meetings in Havana, the group would visit the Province of Pinar Del Rio (PDR). PDR is a leading advocate of social economy and both public and private institutions. They have already demonstrated an interest in the issue of sustainable food systems.

During the trip we also explored ways that the urban government is deliberately encouraging the development of import-replacement business.

Forty-five days after we concluded our visit to Cuba, the media was abuzz with the news that the United States and Cuba had agreed to re-establish diplomatic relations. Upon hearing that, we could not help but reflect on our seven days on the island in a different light.

Our original goal was to share experiences in our respective efforts to develop sustainable food systems. The changing political environment generated by the mere mention of a friendlier Cuban-U.S. relationship gave us pause as we recalled our discussions around the implications of eventually lifting the U.S. embargo. The situation would change rapidly, and not necessarily for the better, especially with respect to the amazing gains made in agroecology.

There is little question that a new relationship between the U.S. and Cuba will be established. This will unfold while Cuba is in the process of reinventing its economic system. The purpose of our proposal is to assist the Cuban people in fully exploring the solidarity economic future they have chosen to pursue. Agriculture plays a pivotal role in that future.