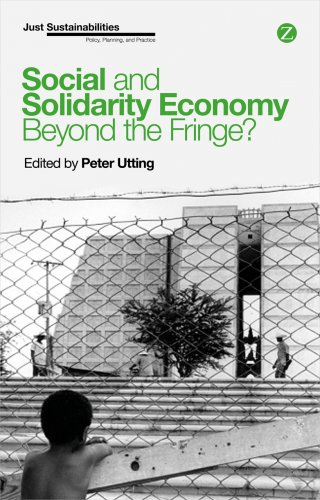 As economic crises, growing inequality and climate change prompt a global debate on the meaning and trajectory of development, increasing attention is focusing on ‘social and solidarity economy’ as a distinctive approach to sustainable and rights-based development.

Bringing together leading researchers, blending theoretical and empirical analysis, and drawing on experiences and case studies from multiple countries and regions, this volume addresses these questions. In so doing, it aims to inform a broad constituency of development actors, including scholars, practitioners, activists and policy makers.

Purchase Social and Solidarity Economy: Beyond the Fringe

Peter Utting is international coordinator of the Center for Social Economy (Centro para la Economía Social or CES), based in Nicaragua, and a senior research associate of the United Nations Research Institute for Social Development (UNRISD). Until August 2014 he was the deputy director of UNRISD, where he coordinated international research projects on social and solidarity economy and corporate social responsibility. He was instrumental in establishing the United Nations Inter-Agency Task Force on Social and Solidarity Economy in 2013. Recent publications include Business Regulation and Non-State Actors: Whose Standards? Whose Development? (co-edited with Darryl Reed and Ananya Mukherjee-Reed, 2012), The Global Crisis and Transformative Social Change (co-edited with Shahra Razavi and Rebecca Varghese Buchholz, 2012) and Corporate Social Responsibility and Regulatory Governance (co-edited with José Carlos Marques, 2010).