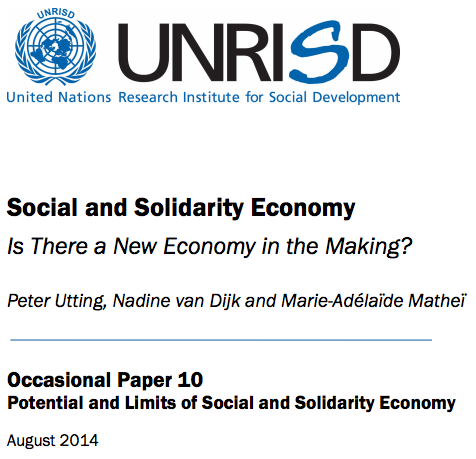 Multiple global crises and heightened concerns about the social and environmental consequences of economic growth and liberalization have reignited interest in alternative production and consumption patterns, and ways of organizing enterprise activities. In recent years, considerable attention has focused on Social and Solidarity Economy (SSE).

Are we seeing in SSE the foundations of a new economy that not only significantly reduces the scope for negative social and environmental externalities associated with conventional for-profit enterprise, but also fosters equitable patterns of resource and surplus distribution and promotes social, cultural and power relations that can be considered democratic, empowering and emancipatory? As SSE expands, the organizations and enterprises involved often become more immersed in relations with markets and state institutions. How do such relations affect SSE? What forms of collective action and participation can ensure that closer interaction with both states and markets can facilitate, rather than undermine, SSE and its core values?

This paper examines these questions. It synthesizes the insights and findings of some 70 papers and think pieces prepared under the research project on Potential and Limits of Social and Solidarity Economy organized by the United Nations Research Institute for Social Development (UNRISD). Part I appraises the potential and limits of SSE as a means of addressing some of the major development challenges currently facing both people and the planet. It identifies various benefits of collective action and economic activities grounded in ethical values and active citizenship. It cautions, however, against romanticized notions of SSE that fail to examine numerous constraints and trade-offs that affect the expansion and reproduction. It goes on to identify a variety of pressures and dilemmas that confront SSE as it scales up and interacts with states and markets.

Part II considers the key issue of how finance affects SSE, the potential of solidarity finance schemes and the issues that arise when scaling up. Part III examines the increasing role of the state in enabling SSE via public policy, law, development and social programmes, local government and supranational initiatives. It also considers different approaches adopted by governments, variations in outcomes and the ongoing challenges associated with the role of the state in enabling SSE. Whether or not state policy and interventions support SSE, and whether or not SSE organizations and enterprises can survive and thrive in the marketplace, depends crucially on the nature of collective action among the producers, consumers and citizens involved and forms of participation, claims making and bargaining. These aspects are examined in Part IV. A concluding section sums up some of the main findings and reflects on future prospects for scaling up and enabling SSE.

Introduction I. Appraising the Potential and Limits of SSE