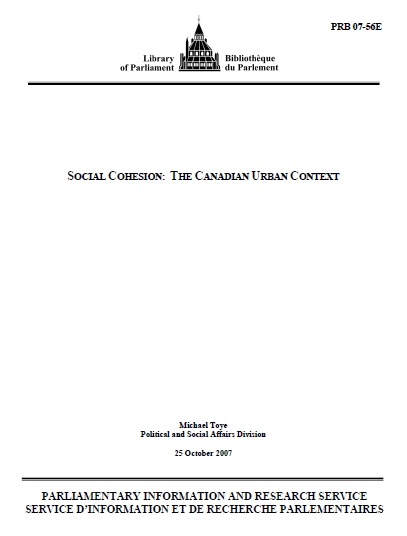 Rapid social, economic and technological change, driven in large part by globalization, are intensifying the challenges faced by Canadian communities. The new forms of social cleavage that are emerging require new approaches to governance, involving a more holistic approach to public policy design and coordination, the promotion of trust or “solidarity” alongside other traditional welfare and economic policies, and a recognition that the process of participation often matters as much as the outcome.

For Canada to sustain itself as a successful, cohesive and competitive society, policy-makers will have to overcome growing social and economic fragmentation by creating new, cross-cutting forms of social solidarity, fostering more encompassing identities, and reversing the trend of economic inequality. Despite its variable conceptualization, social cohesion offers a framework for integrating a range of policy areas in the pursuit of overarching social and economic objectives. The experience of a number of other countries as well as Canadian research and initiatives can usefully inform policy and program design to that end.