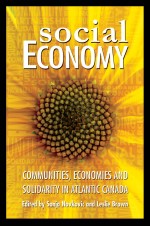 THIS BOOK CONTRIBUTES to the growing literature on the social economy from the particular perspectives of Atlantic Canadians who have been part of the Social Economy and Sustainability Research Network. It illustrates the importance of the sector to the region’s social, economic and public life while exploring its potential for positive change.
Prefiguring an economy based on principles of human values and principles of solidarity, the social economy offers a space for people to exercise democracy in realms thought to be “economic” and thus exempt from such priorities. The social economy has the aim of development in a double sense—development of the individual and local or community development.
What is at stake is no less than democratizing the economy, creating a space for dialogue and debate, building partnerships, networks and capacity for innovation, sustainability, democracy and justice—in other words, developing the potentials for a social economy.
Considerable innovation and significant contributions to quality of life thrive within the social economy in the Atlantic region. Organizations vary tremendously, not least in terms of how successful they are in meeting the immediate and longer term objectives to which they and their supporters aspire. This volume marks one step in furthering such understanding.

SONJA NOVKOVIC PhD is a Professor in the Economics Department at Saint Mary’s University in Halifax. She also teaches in the Masters for Managers of Co-operatives and Credit Unions Program. Her research interests are in worker co-operatives, democratic firms and employee participation, as well as comparative economic systems and the social economy. Besides other publications, she co-edited a book Co-operative Firms in Global Markets: Incidence, Viability and Performance (Elsevier Science, 2007), and guest edited a special issue of the U.K. Journal of Co-operative Studies in 2008. She is past President of the International Association for Economics of Participation and Vice President of Canadian Association for Studies in Cooperation. She is the recipient of the CASC merit award in 2010.
LESLIE BROWN PhD is Professor and Chair in the Department of Sociology and Anthropology at Mount Saint Vincent University, and is the Director of the SSHRC-funded Social Economy and Sustainability Research Network. She has a longstanding interest in organizational democracy, co-operatives and community development, and has written and presented extensively in these areas. Her recent work in the area of social accounting and reporting is funded through the Southern Ontario Social Economy Node. Dr. Brown was the recipient of the Nova Scotia Co-operative Council’s Distinguished Co-operator Award (2003) and the Canadian Association for Studies in Co-operation (CASC) Merit Award (2009).