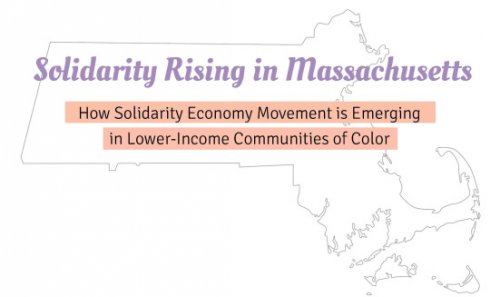 A solidarity economy movement is emerging from lower-income communities of color in Massachusetts. This movement aspires to transform capitalism—as we know it—into a world rooted in values of democracy, justice, and sustainability. These dreams arise from those making Black Lives Matter, from immigrant workers making poverty wages, from ex-prisoners locked out of the mainstream economy, from tenants barely able to make rent, and from communities being displaced to make way for the 1%.

A new report released by the Solidarity Economy Initiative examines eight cases across lower-income communities of color in Massachusetts. Authors Penn Loh and Sarah Jimenez find that aspirations for transformation are spreading from Springfield and Worcester to Lynn and Boston. Communities are organizing to resist and reform the current system, while building alternatives that go beyond capitalism. They are incubating worker-owned coops, community land trusts, and community-controlled capital. They are modeling an economy and democratic governance based on collective care and putting people and planet over profit. Communities are dreaming big, of building regional ecosystems that can scale up transformative impacts.

Solidarity economy is more than just cooperatives. It is a social justice movement seeking to transform political and economic systems and our worldviews. Like other movements, it is shifting our consciousness about root causes and what is wrong, expanding our vision of what is possible, and inspiring dreams of the world as it should be. It is building power, not just to resist and reform the injustices and unsustainabilities produced by current systems, but ultimately to democratically control and govern political and economic resources to sustain people and the planet. And it is creating economic alternatives and prototypes for producing, exchanging, consuming, and investing in ways that are more just, sustainable, and democratic.