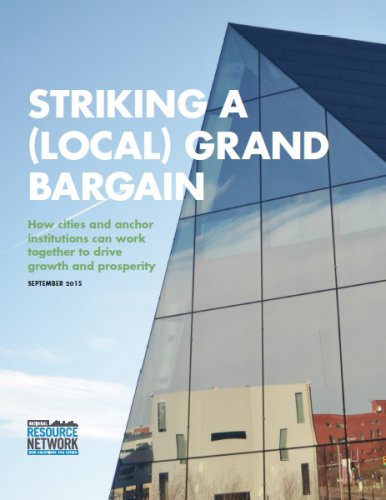 Cities need partners. At a time when local governments are confronting challenges on multiple fronts ranging from rising inequality to fast-moving global economic tides and reduced state and federal support, collaboration has never been so important.

Historically, cities have proven able to respond to local challenges through partnerships. A recent Boston University survey of 70 mayors showed that chief elected officials have an uncanny ability to cooperate with most anyone. In the survey, most mayors ranked the business community as their most reliable collaborator, with the vast majority stating that they have a highly cooperative relationship with local employers. This is no surprise as the private sector has long been the default partner for mayors and city managers. But with capital flight rampant, there are few traditional civic-minded corporate headquarters left.

In 2015, it is “anchor institutions”—universities, medical centers and hospitals—that are the obvious partner for city leadership. In the majority of metropolitan regions, these institu¬tions have eclipsed all other sectors as the lead employer, providing a significant and growing number of jobs. A 2011 study by the Initiative for a Competitive Inner City researchers found that anchor institutions account for five percent of jobs across the country, but fully 11 percent in cities. Often, universities and hospitals are the largest non-governmental employer in their home city, according to a 2015 Lincoln Institute of Land Policy study. And they encompass sectors like medicine and education that are expected to grow rapidly in the coming years with nearly half a million additional jobs projected in urban areas by 2020. But more than just local job engines, anchor institutions are the exact kind of business most communities want in today’s knowledge-based economy, where product value emanates from innovation, not mass production.