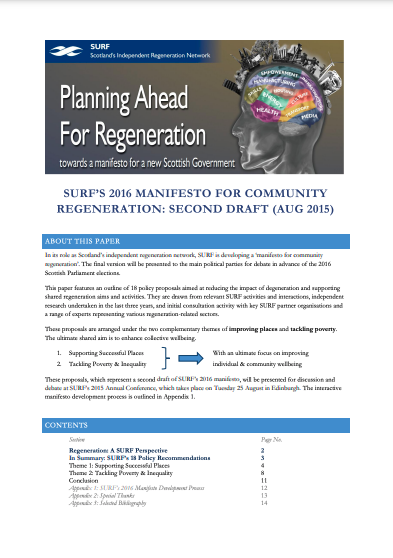 In its role as Scotland’s independent regeneration network, SURF is developing a ‘manifesto for community regeneration’. The final version will be presented to the main political parties for debate in advance of the 2016 Scottish Parliament elections.

This paper features an outline of 18 policy proposals aimed at reducing the impact of degeneration and supporting shared regeneration aims and activities. They are drawn from relevant SURF activities and interactions, independent research undertaken in the last three years, and initial consultation activity with key SURF partner organisations and a range of experts representing various regeneration-related sectors.

These proposals are arranged under the two complementary themes of improving places and tackling poverty. The ultimate shared aim is to enhance collective wellbeing.

These proposals, which represent a second draft of SURF’s 2016 manifesto, will be presented for discussion and debate at SURF’s 2015 Annual Conference, which takes place on Tuesday 25 August in Edinburgh. The interactive manifesto development process is outlined in Appendix 1.