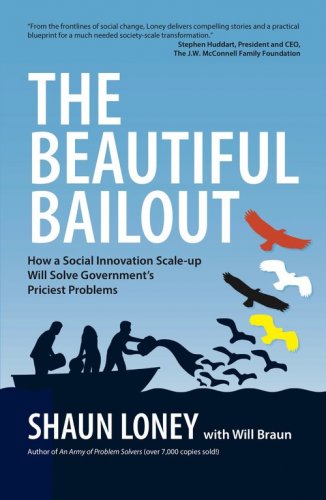 Winnipeg’s social enterprise community has spawned an exciting new book called The Beautiful Bailout: How Social Innovation Will Solve Government’s Priciest Problems. The book is penned by Shaun Loney, an Ashoka Fellow and co-founder of several social enterprises (including BUILD, Purpose Construction, The Social Enterprise Centre, Aki Energy, and Aki Foods). He is also an Ernst and Young Entrepreneur of the Year. Shaun wrote An Army of Problem Solvers: Reconciliation and the Solutions Economy in 2016 which went on to sell more than 7,500 copies, more than many books on national bestseller lists.

Learn more and order a copy of The Beautiful Bailout

Working with Kalen Taylor and Lucas Stewart from Encompass Coop, and Jeff Cyr of Raven Financial, the book outlines an incredibly exciting new model of financing social enterprises called Community Driven Outcomes Purchasing. “Finally”, says Shaun, “we have a model which is scalable, cost-effective and relatively easy to put together.” Shaun explains that social impact bonds haven’t been able to scale solutions citing that there are currently only 122 on the entire planet despite 8 years of working on the model. “The trick,” says Shaun, “is to turn governments from a funder into a customer.” In Winnipeg right now, Manitoba Housing buys $6 million in goods and services from social enterprises. This is called social procurement which is growing rapidly across the country. Added now to social procurement is Community Driven Outcomes Purchasing which allows non-profits to sell their lucrative outcomes.

Shaun notes the differences in how the government partners with the private sector and how it engages the non-profit sector. “When governments want something like a bridge built, a private contractor erects the bridge and then they get paid. It’s an outcomes-based relationship. But with non-profits they use funding and only after a budget is agreed upon. Can you imagine government asking the private sector for their receipt and telling them what’s an eligible expenditure and what isn’t?”

Non-profits have the potential to save governments enormous amounts of money, but at the same time are starved for resources. They currently ask governments: will you please give us some money so we can do something good. However, Loney argues that this is the wrong question. Instead they should ask: will you agree to save money? It is a sea-change in thinking which will require enlightened leadership.

Loney says that there’s a great deal of evidence to suggest that a paradigm shift is about to happen, a conclusion he didn’t draw only two year ago in An Army of Problem Solvers. Look no further than the wide array of interests that have endorsed the book including chambers of commerce, police chiefs, the Canadian Centre for Policy Alternatives and the Canadian Community Economic Development Network.