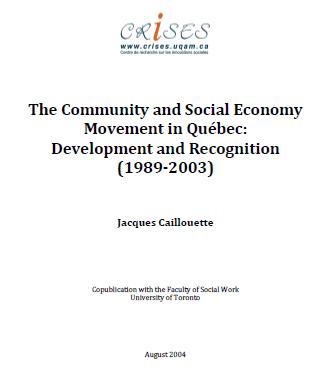 In 2004, the community movement in Quebec finds itself at a crossroads. The new Liberal government (which won the April 2003 election under Jean Charest) wants to break with the approach taken by earlier governments in the nineties. It presents itself as the instigator of an important re-engineering of the state, comparable to the Quiet Revolution of the sixties. The community movement will feel the effects of these changes.

Our working hypothesis in this paper is that the Charest government views social governance within a paradigm of market regulation (PMR), in which democracy is limited to its representative dimension. This way of viewing the social sphere and redefining it by new institutions is by the same token a will to break with a former paradigm, which we call the paradigm of partnership regulation (PPR). Rather than a merely representative democracy, the PPR saw the need for a new approach to governance involving social democracy, which here means a legitimate participation of civil society in the mechanisms of local, regional and provincial governance (Lévesque, 2002).

This paper begins by presenting a brief history of the movement before the 1990s. This is followed by a survey of some of the events of that decade. It looks at the adoption of Bill 120 in 1991, the way civil society actors entered the social economy domain with the Bread and Roses March in 1995, their participation at the Summit on Economy and Employment in 1996 and the adoption of the policy in support of local and regional development in 1997. It will also examines how actors from Quebec’s community organization and the social economy sector participated in the emerging international citizens’ movement in the late nineties. After that, it looks at civil society involvement in the adoption of the policy of recognition and support of autonomous community action (2001), and in the passing of Bill 112 to combat poverty and social exclusion (2002).

With this background, we will be in a position to better articulate what we mean by a paradigm of partnership regulation (PPR) in the sphere of social and economic development.