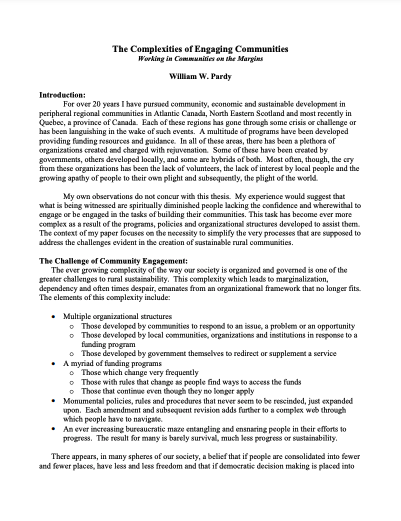 Working in Communities on the Margins

For over 20 years I have pursued community, economic and sustainable development in peripheral regional communities in Atlantic Canada, North Eastern Scotland and most recently in Quebec, a province of Canada.  Each of these regions has gone through some crisis or challenge or has been languishing in the wake of such events.  A multitude of programs have been developed providing funding resources and guidance.  In all of these areas, there has been a plethora of organizations created and charged with rejuvenation.  Some of these have been created by governments, others developed locally, and some are hybrids of both.  Most often, though, the cry from these organizations has been the lack of volunteers, the lack of interest by local people and the growing apathy of people to their own plight and subsequently, the plight of the world.

My own observations do not concur with this thesis.  My experience would suggest that what is being witnessed are spiritually diminished people lacking the confidence and wherewithal to engage or be engaged in the tasks of building their communities. This task has become ever more complex as a result of the programs, policies and organizational structures developed to assist them.  The context of my paper focuses on the necessity to simplify the very processes that are supposed to address the challenges evident in the creation of sustainable rural communities.

The Challenge of Community Engagement:

The ever growing complexity of the way our society is organized and governed is one of the greater challenges to rural sustainability.  This complexity which leads to marginalization, dependency and often times despair, emanates from an organizational framework that no longer fits.

The elements of this complexity include:

A myriad of funding programs

Monumental policies, rules and procedures that never seem to be rescinded, just expanded upon.  Each amendment and subsequent revision adds further to a complex web through which people have to navigate.

An ever increasing bureaucratic maze entangling and ensnaring people in their efforts to progress.  The result for many is barely survival, much less progress or sustainability.