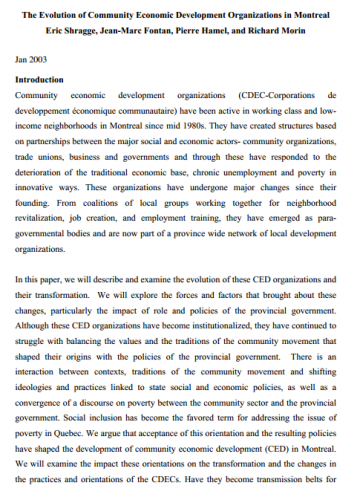 Community economic development organizations (CDEC-Corporations de developpement économique communautaire) have been active in working class and low-income neighborhoods in Montreal since mid 1980s. They have created structures based on partnerships between the major social and economic actors- community organizations, trade unions, business and governments and through these have responded to the deterioration of the traditional economic base, chronic unemployment and poverty in innovative ways. These organizations have undergone major changes since their founding. From coalitions of local groups working together for neighborhood revitalization, job creation, and employment training, they have emerged as para-governmental bodies and are now part of a province wide network of local development organizations.

In this paper, we will describe and examine the evolution of these CED organizations and their transformation.  We will explore the forces and factors that brought about these changes, particularly the impact of role and policies of the provincial government. Although these CED organizations have become institutionalized, they have continued to struggle with balancing the values and the traditions of the community movement that shaped their origins with the policies of the provincial government.  There is an interaction between contexts, traditions of the community movement and shifting ideologies and practices linked to state social and economic policies, as well as a convergence of a discourse on poverty between the community sector and the provincial government. Social inclusion has become the favored term for addressing the issue of poverty in Quebec. We argue that acceptance of this orientation and the resulting policies have shaped the development of community economic development (CED) in Montreal. We will examine the impact these orientations on the transformation and the changes in the practices and orientations of the CDECs. Have they become transmission belts for government programs or are there opportunities and practices that give power to local actors and open innovative possibilities? Have they been able to maintain and promote local democracy and active citizen participation? The tension between the roles of these organizations as regulators and agents of social change is evident in their practices, as the older traditions of the community movement collide with the pressures for integration into the new economic and social realities.

Framing the Analysis
The Context of CED Practice: Community Movement and Government
CDECs: Bottom Up to Top Down
Phase 1: the emergence
Phase 2: the institutionalization process of CED
Phase 3: becoming part of the provincial network
Implications for the CDECs