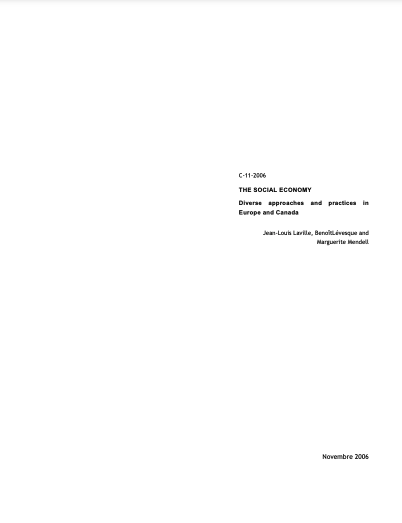 While the social economy originated in Europe, by the nineteenth century it emerged in North America as well, particularly in Canada and Quebec with its ties to the United Kingdom and France as well as other European countries, especially Germany and Belgium. Today, it is interesting to explore the renewal of the social economy in Europe and in Canada in the final third of the twentieth for a number of reasons. First, although Canada is an integral part of the North American continent, inter alia because of its participation in free trade agreements (including NAFTA), it shares many characteristics with Europe, including economic policies that are more interventionist, a more comprehensive welfare state than in the United States, and social movements that are more organised and more widely recognized by government. Second, the renewal of the social economy, notably in Quebec, benefited from a rich dialogue inter alia with France, on theoretical approaches as well as from comparisons of experiences. An important example of comparative analysis was undertaken by the France-Quebec Social and Solidarity Economy Project that influenced the development of public policy to support the social and solidarity economy. Lastly, new theoretical approaches to the social economy are increasingly the result of a fertile exchange between several scientific associations and international research networks such as CIRIEC, EMES and ISTR2.

This paper, which is divided into three sections, provides an overview of the realities and approaches to the social economy in the European Union and in Canada. In the first section, we identify the major periods in European history in which there is a clear articulation between the economy and solidarity, including the recognition of the social economy and the emergence, in recent decades, of a new dynamic that we explore in the context of the ambiguities inherent in the position taken by the European Union. In the second section, we provide a rough outline of the social economy in Canada and in Quebec, focussing on what some have called the “new social economy”, which emerged in the 1970s but above all in the 1980s. In the third section, we discuss the various definitions and theoretical approaches that researchers have used to portray this new reality. While stakeholders have been searching for a consensus definition, researchers have proposed a multiplicity of definitions resulting from their construction of the object of research, the contours of which vary according to the underlying theoretical approach. The literature and the experiences that we draw upon for our overview in this article is the result of extensive research and engagement of the three researchers in close collaboration with the research teams to which they belong – ARUC-ÉS and CRISES in Canada and CRIDA and LISE in France.