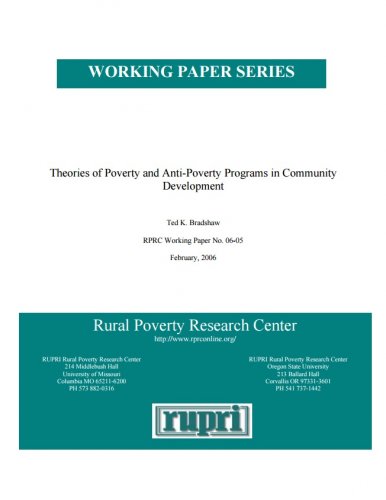 While no one theory explains all instances of poverty, this paper aims to show how community development practices that address the complex and overlapping sources of poverty more effectively reduce poverty compared to programs that address a single theory.

Download Theories of Poverty and Anti-Poverty Programs in Community Development

The thesis of this paper is that community anti-poverty programs are designed, selected, and implemented in response to different theories about the cause of poverty that “justify” the community development interventions. The definition of poverty and theories that explain it are deeply rooted in strongly held research traditions and political values, reinforced by encompassing social, political and economic institutions that have a stake in the issue. Thus, a purely objective explanation of poverty is displaced by a proliferation of socially defined issues and concerns from both liberal and conservative perspectives. Moreover, no one theory of poverty has emerged that either subsumes or invalidates the others. Explaining poverty remains a lucrative field for academics, policy makers, book publishers, and ideologues, and as a consequence the range of explanations has proliferated.

CED Around the World
Poverty Reduction