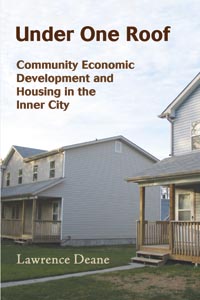 Under One Roof is a case study of an innovative and alternative model of community economic development, one quite at odds with the conventional “export/free market model” of CED. Using the North End Housing Project in Winnipeg as his focus, Lawrence Deane assesses the strategy of housing as the centrepiece for CED. The people in William Whyte neighbourhood founded and ran NEHP to buy, renovate, rent and sell housing to residents in one of the lowest-income locales in the city. Their efforts provided adequate, affordable shelter and increased the surrounding housing values. In addition, the project was a catalyst for jobs for the unemployed, for developing the economic structure for the area and for building social capital in the neighbourhood. The project also included a strong Aboriginal focus. The lessons learned at NEHP will be valuable to anyone concerned with community development that works.