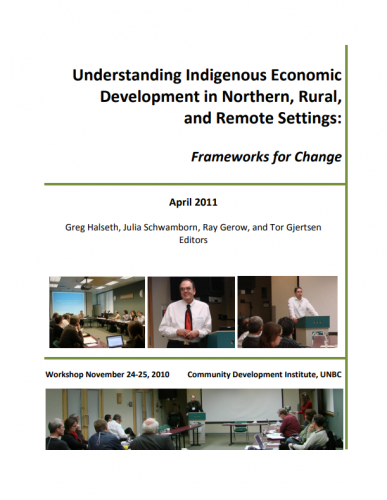 As part of its work with the University of the Arctic’s Thematic Network on Local and Regional Development, UNBC’s Community Development Institute (CDI) and the Prince George Aboriginal Business and Community Development Centre jointly hosted the “Understanding Indigenous Economic Development in Northern, Rural, and Remote Settings” workshop. The goal was to produce a rich dialogue that could enhance our understanding of key barriers and opportunities related to successful indigenous economic development both on-reserve and in urban Aboriginal communities.

Speakers and observers were invited from around BC, Canada, and Norway. The workshop brought together thirty-one individuals, institutions, academics, and practitioners who are actively involved in indigenous economic development in the North, and three of the University of the Arctic’s Thematic Networks – Local and Regional Development, Northern Governance, and Northern Tourism – were represented.

In this volume, workshop participants identify and challenge the framework of current indigenous economic development, point out key barriers to successful development, and address actions and supports needed to achieve change.

Source: University of Northern BC