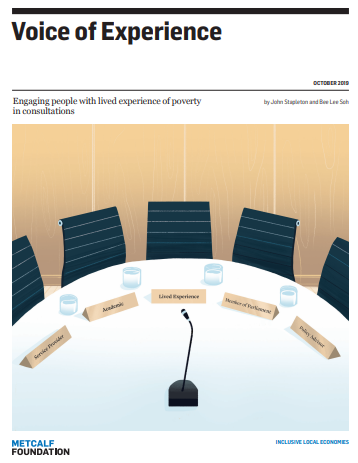 On August 21, 2018, the Government of Canada released “Opportunity for All – Canada’s First Poverty Reduction Strategy.” In his letter of transmission to the Prime Minister, the Minister of Families, Children, and Social Development, the Hon. Jean-Yves Duclos, said: We heard from members of my advisory committee, drawn from Canada’s incredible range of social, cultural and economic backgrounds.

“We heard from academics and researchers. We heard from people working on the front lines of tackling poverty. Most importantly, we heard from Canadians with lived experiences of poverty.”

As the Hon. Jean-Yves Duclos acknowledges, the engagement of Canadians with lived experiences of poverty in government consultations on poverty reduction is critical to these consultations. But as hard as governments work to try to include people living in poverty as full participating members in their consultation processes, there are many barriers that continue to impede their participation.

This report is not meant to be critical of government policies or procedures that inadvertently act as barriers to participation. Rather, it is intended to illustrate how many requirements of participation, including access to both goods and services, are increasingly unavailable to people living in poverty. With input from Bee Lee Soh, I have organized the issues — faced by individuals living in poverty when engaged by governments in consultations — into five thematic categories.

Governments value participants with lived experiences of poverty in consultations as these individuals have expertise in the myriad of challenges and the intricate details of how daily life is lived when one does not have the resources to fully participate in all aspects of community life. Moreover, they have deep insights, not available to program experts, as to how recommendations for reform will actually “play out” in their lives once implemented. Put succinctly, only people with lived experience of poverty, such as Bee Lee Soh, can accurately anticipate whether a particular intervention to reduce poverty will actually achieve its intended purpose. They are also the experts in unintended consequences of poverty interventions.

We hope that this report will provide practical considerations for a wide audience who are interested in conducting, or are involved with, consultative processes involving people living in poverty. Ultimately, we hope it will be a valuable resource to various groups who want to engage the full participation of people with lived experience.