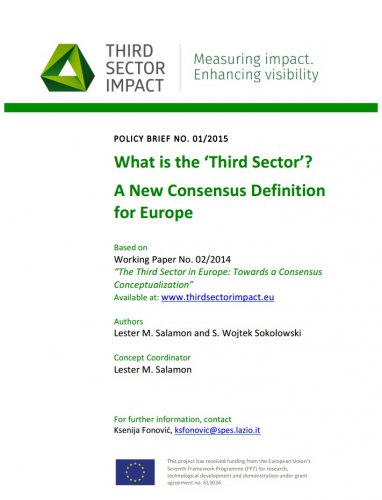 This Policy Brief is based on the important objective of the TSI poject to formulate an all-embracing conceptualization of the third sector in Europe. It points out that “jurisdictional squabbles, abstract definitional disputes, diverse legal regimes, and arcane statistical procedures have kept Europe’s rich associational life and the contribution it makes to European prosperity hidden in plain sight.” The lack of a definition that draws attention to their commonalities has to date prevented a coherent overview of the third sector’s scope and impact, reducing the sector’s overall policy voice. TSI’s “common core” definition of the third sector fills the conceptual void, providing a framework through which to make European citizen engagement and its impact more visible and thus to promote a greater appreciation of the “Europe of citizens.”

TSI includes private associations and foundations; non-commercial cooperatives, mutuals, social enterprises; and individual activities undertaken without pay or compulsion primarily to benefit society or persons outside of one’s household or next of kin. It recommends this definition to policy-makers and practitioners alike, to bring the continent’s rich associational life into clearer view and provide a basis for gauging its impact and fostering policies that build on its unique strengths.

The TSI project consortium invites European and national-level institutions and third-sector networks to review this consensus third sector conceptualization and consider endorsing it as an important basis for cooperation among different types of third sector institutions and for interaction between them and both government and business.

TSI Press Release No 3: New Consensus Definition of the Third Sector Third Sector Impact (TSI), a European research project that set out to address conceptual ambiguities in the field of third sector research and policy, has reached an important goal: the first formulation of a consensus definition of the third sector in Europe that embraces associations, foundations, volunteer work and significant parts of the social economy.

The ILO Manual on the Measurement of Volunteer Work

An undervalued resource Volunteer work is a sizeable part of the labour force in most countries and makes a significant economic contribution. For example, Statistics Canada recently reported that the contribution to GDP of volunteers in that country exceeded the GDP contribution of agriculture. Yet most countries lack reliable systems to gauge the extent and character of volunteer work, and what data do exist are not comparable. As a result, volunteer work remains under-valued and its potentials under-realized, leaving volunteers, volunteer managers, policy-makers, government officials, and business leaders without the crucial information they need to effectively manage and support this crucial renewable resource for societal problem solving.