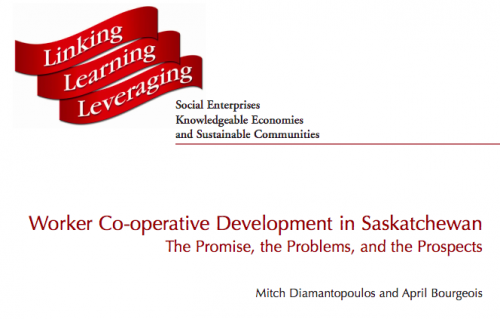 This study examines the potential for a stronger and more significant worker co-operative sector in Saskatchewan and probes some of the development barriers that prevent it. These barriers to democratic, worker-led enterprise include systemic problems — structurally rooted in the political economy of investor-led development — and contextual problems specific to the province’s evolving economic, social, cultural, and political development.

To address the systemic problems, the analysis builds on a review of the comparative literature, much of it generated in the context of the eighties worker co-operative boom. These findings on enabling practices and policies from other regions focus on problems of finance, management, work-culture, expansion-barriers, and collective entrepreneurship. In these areas, the potential for adopting effective innovations from elsewhere is considerable.

To address the contextual factors more specific to Saskatchewan, the study focuses on issues of legal definition and reporting, demographics, labour market structure, movement culture, and provincial partnerships. In these areas, more endogenous solutions are required. These include the need to (re-)involve provincial sector, state, and extended social movement families in building new development coalitions to drive new co-operative campaigns.

This bi-focal approach provides the basis for the analysis and recommendations that fol- low. However, while the study is structured around the promise and problems faced by worker co-operatives, this model is part of a wider family of worker-inclusive co-operative enterprises. Indeed, the worker co-operative has acted as a “wedge sector,” driving wider forms of multi-stakeholding such as worker-shareholder or solidarity co-operatives. This report finds that investments in worker co-operative development also drive the development of a wider new sector of adaptive models that also include workers in governance, although not exclusively. Building a strong worker co-operative sector can help open the door to other new models, thus further building overall movement diversity and its potential to regenerate and expand.

Indeed, worker co-operative development needs to be understood as part of the New Social Economy response to the new needs and structural dislocations associated with globalization. A clearer understanding of this model’s potential and problems thus also provides important insights into wider problems and potentials for emerging forms of entrepreneurial diversity. This includes common transition problems facing other emerging co-operative sectors, social enterprises, and forms of employee ownership.

INTRODUCTION: THE PROMISE, THE PROBLEMS , AND THE PROSPECTS
THE PROMISE
THE PROBLEMS
–  Systemic Problems and the Five Barriers Theory
–  The Capitalization Problem: Access to Finance
–  The Managerial Problem: Appropriate and Effective Democratic Leadership
–  The Work Culture Problem: How to Work As Worker-Owners
–  The Limits to Growth Problem: Internal Barriers to Expansion
–  The Entrepreneurial Problem: Low Formation Rates
–  Some Contextual Barriers in Contemporary Saskatchewan
–    Legal, Reporting, and Definitional Issues
–    Demography and Worker Co-operative Development
–    Unemployment and Labour Mobility
–    Movement Culture
–    Patrons and Partners
THE PROSPECTS
APPENDICES
REFERENCES
LIST OF PUBLICATIONS