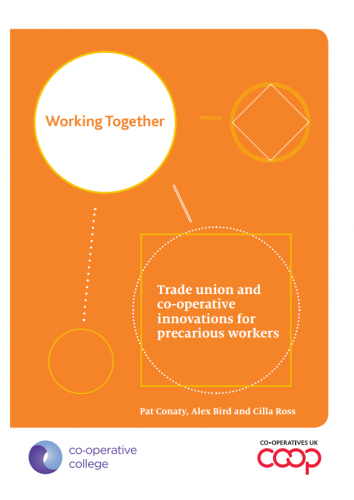 The assumption of a 9 to 5 job has long gone, but as new forms of work create new forms of risk and with no employer necessarily to turn to, there are a range of initiatives emerging which look to technology and self-organisation by workers to get by. Additionally a diversity of mutual aid solutions are showing the scope to advance worker control.

Historic data suggests that the last decade has seen a greater squeeze on real wages than at any time over the last one hundred and ffty years. The pay of younger workers has fallen at twice the rate of older workers. The share of national income paid to labour has declined. As workplaces change, so trade union membership has declined, weakening an important counterweight to the voice of investors in public life.

Zero hour contract work over the past decade has increased ten-fold to over 800,000 in the UK. Self-employed forms of work have increased by 1 million to over 4.8 million and at 15% of the workforce is at the highest level in forty years.

With the erosion of the archetype of a fve day week, full time for most, agreed hours job goes the loss of a wide range of benefts in favour of precarious work with limited rights and imposed fexibility. Not all self-employment is of this form, but what tends to be characteristic of newer self-employed workers and those on zero hour contracts is low pay, limited legal protection, high insecurity, limited social security access, limited pension entitlement and limited collective representation. Surveys show that casual agency staf and selfemployed workers are earning 40% less than an average employee.