Walmart is not Greenpeace. It may do its bit for greening, just as Greenpeace has promoted a product called Greenfreeze (for refrigerators). But Walmart is a business, in the private sector, while Greenpeace is an NGO, in the plural sector (civil society). Shareholders own Walmart; nobody owns Greenpeace. That matters.

This seems clear enough. But these days, in between these two examples, we find all sorts of organizations pushing the line between business enterprises and social associations: businesses that engage in social activities and associations that engage in economic activities. Does that mean this line no longer matters? Some people believe so. We do not. We believe that ownership matters.

As individuals, it is easy enough to balance our time between the economic and the social: for example, doing business in our working hours and volunteering for social activities in our private time. But how about organizations? True, every one has multiple intentions, some financial, others social. Greenpeace has to meet its budgets while focussing on protection of the environment, and Walmart wants to be seen as socially responsible while focussing on returns for its shareholders. But can organizations balance economic imperatives with social needs so that neither dominates?

At the extremes are corporations that concentrate on the profit-maximizing “Shareholder Value” (restricting their social activities to keeping within the letter of the law) and NGOs that concentrate exclusively on their social missions. In between, we list below five forms of organizing that seek some combination of the social with the economic, two with a priority for private profit, three with a priority for social impact.

Socially Responsible Companies   Here we refer to companies, big and small, that act in socially responsible ways, beyond any claims of CSR. Their intentions are clearly profit driven, but they acknowledge a belief in acting beyond the letter of the law.

In fact, a popular mantra these days is that “it pays to be good”, or, if you like, that companies “do well by doing good” (which suggests that the social is pursued for purposes of the economic). Some companies do succeed at this, but are these more numerous than the ones that do well by doing bad—whether by being criminally or legally corrupt? There is no win-win wonderland out there,  any more than there is justification for the opposite, popularized dogmatically by Milton Friedman, that a business has no business attending to anything but its business.

Benefit Corporations    B Corps and other new legal structures such as Community Interest Companies (CICs) have a double bottom line: social alongside economic. In effect they seek to have their social cake while eating the financial profits. In the USA, B corps are certified—as one such company put it, “to provide a ‘general public benefit’, which ‘means a material positive impact on society and the environment, taken as a whole,” subject to an annual assessment. This particular company does note that the B Corp law in its U.S. State (California) “does not require any particular score on such assessments…” Indeed, shareholders have the  “dissenters’ rights” to cancel this status.

Hence the forms above do not quite balance the social with the economic. Both fall on one side of the line, operating in what can be called the Investor Economy. We can describe them as economic enterprises with social concerns beyond CSR. But their intentions are ultimately profit-driven. Their good social intentions notwithstanding, when push comes to shove shareholder ownership does matter. On the other side of the line is the true Social Economy, where organizations tilt the other way.

Cooperatives    Cooperatives are businesses too, but with a major difference. They are owned by their workers, by their customers, or by individual producers (as in farmer cooperatives)—not as investors, but as members, each with a single share that cannot be sold to anyone else. In cooperatives, it is the members who matter, first and foremost. Recognizing the primacy of people over capital, it is one person, one vote. A new form of co-op, called solidarity, with multi-stakeholder membership and a non-profit status, is emerging as one of the fastest growing sectors of the social economy.

This is not to deny that some cooperatives lose their way, for example by becoming obsessed with profit. But that can be true of all these forms of ownership, as when a management pursues its own social agenda beyond what the shareholders are prepared to accept.

Community Enterprises   Here we enter the realm of what could be considered intrinsically social enterprises. These too are businesses, but owned by no-one—they are often referred to as “not-for-profit.” Of course, they had better make surpluses to sustain themselves. But social needs, for example to serve the constituencies that gave rise to them (e.g., creating local employment or responding to some cultural need), are paramount.

It is not an accident that cooperatives as well as community enterprises average longer lives than privately-owned businesses. While businesses are usually started by individual entrepreneurs for personal gain, social enterprises usually arise in response to collective needs, often in identifiable communities. Because of a resulting “collective heritage”, their potential to offer a more sustainable model of economic development merits careful attention.

NGOs with Economic Activities   Here we return to the Greenpeace example, or the Kenya Red Cross that has built hotels to help fund its more basic social missions. In effect, this form can be seen as the mirror-opposite of the socially responsible corporation: these are fundamentally social organizations, but with commercial activities. They operate in the Social Economy, not the Investor Economy, so that when push comes to shove, it is the social intentions that matter.

Can we have our social cake and eat the economic results too?    Every one of the positions above has its own legitimacy—in its appropriate context. But we must be careful not to mix them up. Just as we require businesses to run primarily as businesses, to supply us with certain types of goods and services, so too do we need social economy enterprises that serve social and environmental needs while, for instance, creating jobs in the economy.

But what about some new hybrids that are appearing, such as companies with limits on return to investors or wage gaps, and joint ventures between cooperatives, non-profits, and private businesses? It is too soon to tell how these will fare, but we do need to experiment as much as possible, given that the traditional, publicly-traded corporation is running into so many problems. 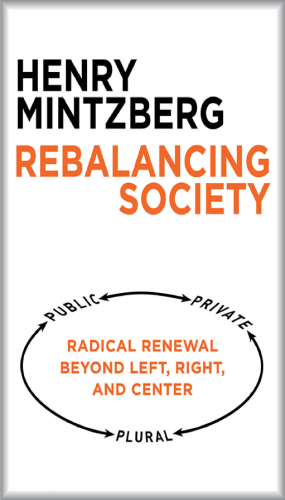 We also need to introduce one word of caution here. The Balanced Scorecard—an effort to include multiple performance measures, social and economic, on the bottom line—cannot be balanced because, as discussed in last week’s TWOG, things economic are inevitably easier to measure than things social.