For Women Transforming Cities, the present-day economic reality is one of increasing inequality that has disparate outcomes for marginalized communities. This is to say that economic inequality tends to fall along gendered and racialized lines (to name only two). Such inequality is echoed in the Canadian labour force, which is still arranged along these divisions, and gendered and racialized arrangements closely coincide with our focus on non-renewable natural resource extraction–an industry that largely employs men with access to good wages, benefits and entitlements, and one that we know heavily contributes to climate change. Combating climate change and inequality is a simultaneous battle, and formulating visions of a new economy need to be equally green and just. Natural and social costs of economic growth must be internalized into economic valuations because if we move towards making our economy green without addressing social inequities, we will be replicating the same structures that reinforce the exploitation of both the environment and the labour of women and marginalized groups.

What are some key elements of “new economies”?

Key elements of a green and just economy include:

According to the 2011 census, 81% of Canada’s population lives in urban centres. Clearly then, transforming our cities into gender-sensitive, equitable and green economic centres is a priority. Cities drive the Canadian economy and Canada needs to recognize the importance of cities and invest in the well-being of local residents to foster a sustainable and inclusive future. Central to sustainability and inclusion is the need to focus on and deliver on the needs of the diversity of its residents equitably – including in terms of a good job and a decent living wage. 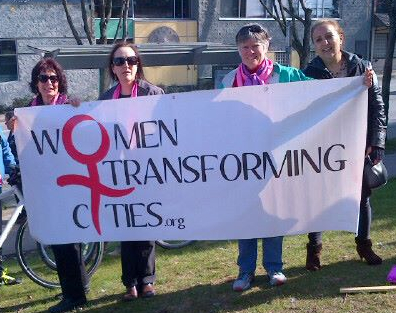 Women Transforming Cities aims to transform our cities to work for all self-identifying women and girls by amplifying the voices of women and raising their issues for municipal policymakers. We hold grassroots-focused monthly cafes where women and allies in the community come together to discuss issues and brainstorm solutions that would make our communities more equitable. We also partner with other local organizations and service providers to increase the pressure on municipal policymakers to put an intersectional lens on all of their work that we believe will help implement the changes we want to see in our communities. Looking at public policies intersectionally means that we deny the belief that any one policy will affect all citizens (and groups of citizens) in the same way. Using an intersectional lens will account for disproportionately unequal outcomes of public policies, allows us to asses where inequalities are stemming from, and ultimately, allows us to make specific policy recommendations that would remedy such problems.

WTC is also part of the national coalition, Up for Debate 2015, which advocates for a federal leaders debate about women’s issues in the upcoming federal election. The debate will be an important part in getting politicians to address the measurably unequal economic outcomes of current Canadian policies for marginalized groups in both urban and rural communities.

Real wealth means self-identifying women and girls having real social, economic and political power, with the right to live in a healthy environment. If security, housing, childcare, transit or public spaces are either unaffordable or inaccessible then there are few real choices for women in structuring their lives and the lives of their families in our cities.

Jessica Knowler is a board member of Women Transforming Cities, a Vancouver-based organization that works to transform our cities to be inclusive of all women and girls, through community engagement, inclusive policies and equitable representation. Her community service work and research interests include the connections between precarious labour, food security and sustainable economies. The report Working Women, Working Poor (2014) by fellow WTC board member, Prabha Khosla, is the foundation for Women Transforming Cities’ position on new economies. The report can be found here: https://www.unifor.org/en/worki