Serving as mayor provides one with an array of opportunities to demean oneself on a regular basis—funny hats and dunk tanks tend to be involved. However, for me, and for most of the mayors I know, the lowest moments occur in the grandest corporate offices during economic development ‘recruitment’ trips. After schlepping the best and brightest ambassadors from our city to visit the target company, a mayor is given 30 minutes to make their pitch that the company will be happier, more productive, and profitable in their community. A PowerPoint presentation is given focusing on the quality of the schools, the vibrant culture, the ready and able workforce and, of course, how the city is “business friendly.” The mayor wraps up with an impassioned entreaty that a good community could be made great if that company would move their offices to town.

The company’s senior vice president of real estate then offers his thanks and notes that your hometown is indeed a wonderful place, but is deficient in the following ways: access to transportation, high cost of housing, proximity to suppliers, or some combination thereof. He then notes that another city, which happens to possess all of these necessary attributes, was just in last week. They have offered a very attractive package of tax breaks and public investments that this mayor would need to beat in order to stay competitive.

Now that the competition and egos between mayors (who are by definition hypercompetitive) are properly stoked, a bidding war ensues and good economic analysis and public policy quickly fall by the wayside. In the end, the company moves to the community it was probably going to move to anyway, but with a generous combination of tax breaks and subsidies that justify the senior Vice President’s salary.

For a generation, Michael Shuman has been a lonely voice arguing against these kinds of deals. In an attempt to bring reason and thoughtfulness to the politics of economic development, he has focused on commonsense economics. His new book, The Local Economy Solution: How Innovative, Self-Financing “Pollinator” Enterprises can Grow Jobs and Prosperity (Chelsea Green, 2015) reiterates the core arguments of his previous works: first, most businesses in the United States are local. Second, local businesses are engines of growth and much more likely to create jobs than large companies. So, cities and states should stop trying to lure huge corporations from one jurisdiction to another and should instead invest in the local businesses that are likely to stay, create jobs, and support the local economy. Shuman was local before local was cool.

Shuman effectively highlights the madness of the traditional and expensive economic development approach. He starts with Maryland paying the producers of the Netflix series House of Cards USD $26 million to film the show in Annapolis, even though the city is disguised as Washington, DC. The filming creates 5,900 mostly part-time jobs, which means that the state is paying USD $4,400 per position per year in the best-case scenario, because not all the jobs go to Marylanders who are underwriting this bill with their tax dollars.

Maryland looks good in comparison to some of the other jurisdictions highlighted by Shuman. Sarasota, Florida offered a Danish pharmaceutical company USD $137 million in incentives to create a mere 191 jobs— and lost to a county in North Carolina. As Shuman points out, USD $137 million invested in bonds at five percent would generate USD $38,000 annually in perpetuity for every Sarasotian.

These examples are shocking, but it is the aggregate impact that is the most troubling. As governments spend billions to steal businesses from one locality to another, Shuman’s point becomes very clear: “Economic development today is creating almost no jobs whatsoever…[and it] constitute[s] a net drag on the economy.” Thankfully, his solution to invest more locally is gaining traction with policymakers, even as some high profile governors—now Presidential candidates—continue to buy commercials in other states offering relocation services. 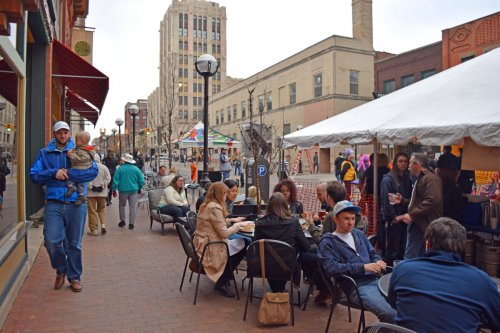 Unfortunately, investing locally is easier said than done. Economies have grown more complex and globalized. Is it better to buy a table made in Malaysia from your local furniture store or from an Etsy artisan 500 miles away? How does, or how should, a community support a business that exports its products globally? Should we consider the nearby publicly traded company part of the local economy, or part of theWall Street economy?

From his years consulting with communities and working with and for BALLE (the Business Alliance for Local Living Economies), Shuman offers some interesting direction for these local efforts: they must be self-sustaining and not reliant on grants and goodwill. This is an important point that he reiterates throughout the book, but it also makes for dispiriting reading: a job creator in Appalachia is creating hundreds of jobs at a cost of just USD $500, only to see his funding run out: a successful local coupon book loses popularity; an innovative government administrator tires of fighting with his Chamber of Commerce and takes a job at a public market.

One must give Shuman credit for pointing out the realities of local economies—they are unique, messy, and reliant on a few key leaders, which is not a good combination when competing against relentless and focused mega-corporations and their lobbyists. However, Shuman offers dozens of potential solutions, such as youth entrepreneurship schools, local debit cards, maker spaces, and coordinated local farmer delivery services. With all of these possible solutions, a community should be able to find a strategy or two that will move the needle.

Small is (or at least has the potential to be) big. Shuman quotes an innovative Melbourne-based developer who argues, “Economic development needs a paradigm shift. It needs to embrace deeper democracy, deeper engagement. It’s not just about economics of money, but cultural economics and human economics. It should be a transformative process, connecting head, heart and hand…we can’t forget the joy and celebration.”

Richard Florida, an economist and best-selling author, has similarly argued that, “For perhaps the first time in human history, the further progress of our economy is inextricably tied up with the further development of our essential humanity.” This is no easy task. Shuman has pro