After working in the non-profit and social enterprise arena for over three decades, David LePage founded Accelerating Social Impact (ASI) in 2013 to pioneer an unusual type of business – a Community Contribution Company. This hybrid enterprise model blends the traditional for-profit corporate model with a targeted social purpose, and allocates 60% of its dividends to this purpose. This differs from typical social purpose businesses and benefit corporations, who are not legally bound to divert profits from investors.

The purpose of ASI itself is to accelerate this blended business world and help invigorate the social value of business, from policy all the way to purchasing and supply.

In your view, what are some key elements of “new economies”?

I think it’s actually the old economy. In North America 2000 years ago, the Aboriginal communities had a thriving cross-continent trading system that went from Mexico to Quebec to Vancouver, based on the exchange of goods and services to create healthy communities. If you trace historically the exchange of goods and services anywhere, it was based on a culture of mutual benefit, or “what do you have that I need?” mentality.

It wasn’t until the industrial revolution that we developed this idea of “you can’t have what I have unless you pay me more”. We created workers and factories, exploitation and the profit motive.

What some call the “new economy” is what I call the “true economy” or “community economy” – the economy as a tool to help us create healthy communities. In the modern world, we’ve switched it around and made the economy the objective.

How do we make the leap to a community economy in the 21st century?

A recent article by Robert Reich looked at how many people employed now are actually producing material things. When you add in the new technology of 3D production and robotic construction, there aren’t many people making things. We’re just exchanging dollars and services. I think the conversation we’re having is about shifting the culture of today’s economy. It’s a new exchange, but we haven’t figured out how to shift from the old model of paying someone to make stuff and someone else buying it. The structure of our economy needs to catch up with how we function as a society.

What would a more just and equitable system look like? 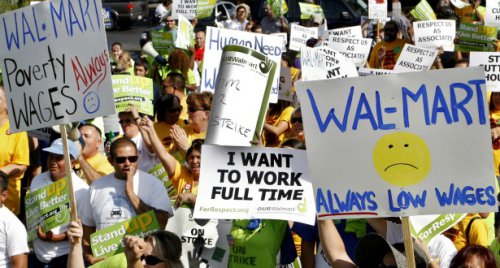 We need to change the structure of the economy and what we value as a society. We still have a minimum wage that makes people poor, and that working at fast food restaurant is not a legitimate job. We need to rethink what’s considered professional versus a service. We now have doctors running businesses based on what they can charge, yet people working in the service industry – nurses, naturopaths, homeopaths, and others outside of mainstream – have to struggle because it’s not seen as professional. This applies to any industry, where the dichotomy of working and owning is just changing.

Another aspect is that we have to do the environmental, social and economic all together.  People complain about Walmart selling organic food because organic without a fair living wage is only halfway there.

More people nowadays are conscious of externalized social and environmental costs. The government has subsidized so many things to create a market for certain partners. We just don’t know what a McDonald’s hamburger costs, for instance. When we account for all of its impact on environment, society, and future generations, who’s going to pay $175 for a hamburger? We need to look past the artificially low prices, and be aware of the actual “costs” of what we’re buying.

Again, people are saying this is all new, but libraries have been around for a long time, and they’re a great example of the sharing economy. Farmers have had co-ops for almost 200 years and other models like tool-sharing and credit unions. Calling it the sharing economy and exploiting people doesn’t make it any different from the traditional economy. Take Uber for example, where they charge people more at busier times. Instead of paying a taxi driver, you’re just paying this other guy. I think whenever we create a platform, we have to look behind the name and evaluate the exchange value.

How do these relate to cities?

As more opportunities arise, we won’t have everyone moving to cities but we may start having urban and rural cities again. In Canada especially, we have a concentration of people in urban areas, and rural communities are devastated in terms of jobs and opportunities. If we start to shift the meaning of a job or opportunity, people can start to be healthy in their own communities.

Real wealth is putting community ahead of the individual. It’s not just about financial capital but social, cultural, and environmental capital as well. What truly makes a community wealthy is having a balance, maybe even an abundance, of multiple capitals.

Based on an interview conducted by Jane Zhang