The United Nations Inter-Agency Task Force on Social and Solidarity Economy (TFSSE) has published a paper outlining its position and voicing concern that “the process of crafting a post-2015 development agenda and set of Sustainable Development Goals (SDGs) has paid insufficient attention to the role of what is becoming increasingly known as the Social and Solidarity Economy (SSE).” 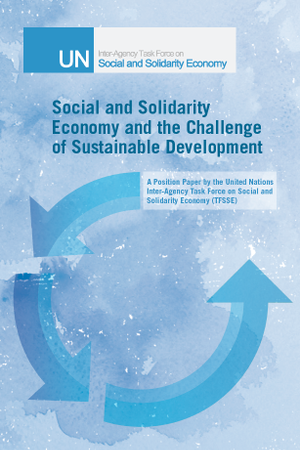 TFSSE was founded following a conference in May 2013 on the Potential and Limits of Social and Solidarity Economy organized by the UN Research Institute for Social Development, which is also a member of TFSEE.

TFSSE’s position paper asserts that effective sustainable development, from a socio-economic perspective, must include:

The paper also provides a short overview of what the SSE is and why it matters, stating that “Rather than assuming that the benefits of growth will ‘trickle down’, or rely[ing] on safety nets to protect the vulnerable and on technological fixes to protect the environment, SSE seeks proactively to mobilize and redistribute resources and surplus in inclusive ways that cater to people’s essential needs. Furthermore, SSE promotes environmental protection and the economic and political empowerment of the disadvantaged and others concerned with social and environmental justice.”

This position paper follows the recent efforts of the Intercontinental Network for the Promotion of the Social Solidarity Economy (RIPESS), an observer member with TFSSE, to develop and present a succinct set of SSE recommendations for the UN’s Post-2015 Development Agenda. These recommendations received over 500 endorsements from organizations in over 70 countries, including the Canadian CED Network and several of its members.