That’s the bet, if you will, that Thrive Calgary, the city’s community economic development network, is making as it prepares to launch a new learning community early in the new year.

It’s a big and exciting shift for the network, though Thrive has always sought to be a relevant, effective force for ushering in Calgary’s new economy.

In the past, however, the work has centred on collaborating to put community economic development on the local policy map. In the last few years, that goal has largely been achieved.

Now Thrive is sharpening its focus in 2015: Community economic development leadership and learning is its refreshed mandate.

The shift builds on a number of education achievements Thrive has already spearheaded. As an example, in 2014, a big focus was bringing the Simon Fraser University Community Economic Development certificate program to Calgary for the first time. 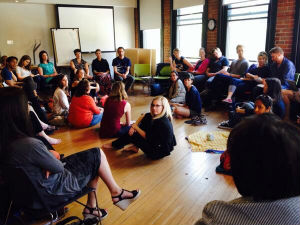 The 21 graduates of this program are now acting to improve the local community in many concrete ways. For instance, one graduate is preparing to launch a co-operative housing project in Ogden. The idea is to make it easy for seniors to establish income suites in their basements so they can live longer in their homes.

Another graduate led the development of the Calgary EATS! Strategy which was just approved by city council. This strategy for a local, sustainable food system includes community economic development as a core principle.

Thrive has determined to make learning its official strategic focus following a series of community consultations and discussions with various partner organizations over the past several months.

Shaping this new effort is a belief that the most effective learning both builds human capital and creates a frame for political empowerment. 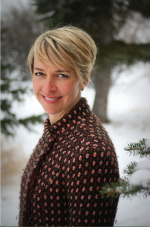 “We’re really trying to inspire people to question the frame we live in in the first place and really seed a broad, diverse community of leaders who are ready to take action in their own communities,” Barb says.

Thrive’s learning community will offer a balance of opportunities for people to learn from those who hold new knowledge, as well as to create their own knowledge as peer learners.

Again, this is an approach it’s taken in the past. In 2014, for instance, Thrive provided Calgarians the opportunity to learn from well-recognized community economic development thought leaders such as Charles Eisenstein, Michael Shuman, and Anne Docherty. The graduates of the Simon Fraser University Community Economic Development certificate program now support each other with implementing community economic development strategy and ideas.

“We want to create the most permeable membrane between a learning environment, action environment and community as we can,” says Barb, noting a key inspiration for the effort is the Storytellers’ Foundation in Hazelton, BC.

The shaping of this learning community comes as Calgary moves into the next phase of actualizing its Enough for All strategy – a bold plan to reduce poverty in the city by half within the next 10 years. 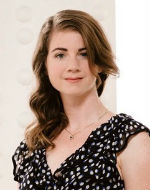 “I really believe that we’re not going to be able to do that unless there is a sea change in the way that we think,” she says. Her sincere hope is that through the learning community people are empowered and inspired to take the kind of action that generates a shift in systems and root causes leading to significant change for people.

The time is also ripe for an effort of this sort as local energy grows around new economy concepts and action, thanks to people and groups such as REAP Business Association actively bringing them into the mainstream.

Thrive wades into this new effort with a collection of robust assets, including an engaged and committed network as well as steering committee that brings a rich diversity of perspectives on community economic development. Thrive’s parent organization Momentum, which has both a sturdy reputation and significant support from the community as well as a great team, is also a solid asset.